An Army National Guardsman has been sentenced to six months incarceration, followed by six months of home detention with electronic … Continued 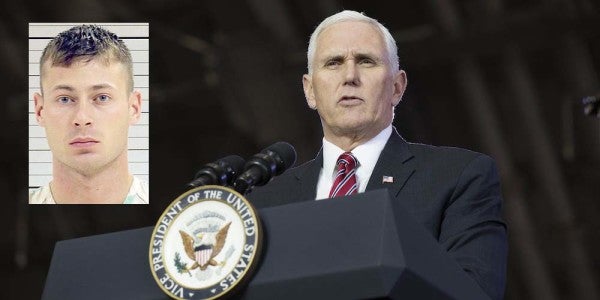 An Army National Guardsman has been sentenced to six months incarceration, followed by six months of home detention with electronic monitoring, for making a threat against Vice President Mike Pence.

He has also been ordered to immediately participate in a mental health evaluation/treatment program and then three years of supervised release, according to a statement issued by the U.S. Department of Justice on Friday.

William Robert Dunbar, 23, of Berlin, pleaded guilty to the lone count in December.

Dunbar made the threat on Sept. 8, while on active duty at the Army National Guard Training Center in Richland Township, according to a complaint filed in the U.S. District Court for the Western District of Pennsylvania, Johnstown Division.

Pence was scheduled to arrive in Johnstown on Sept. 11 and then speak at the Flight 93 National Memorial in Stonycreek Township, Somerset County, as part of a ceremony marking the 16th anniversary of the Sept. 11, 2001, terrorist attacks.

The vice president eventually gave a keynote speech at the event.

Three witnesses heard Dunbar say he would kill Pence, per the DOJ.

U.S. Secret Service conducted the investigation that led to the successful prosecution.