The U.S. Navy has tasked five warships to respond to Hurricane Irma-ravaged areas as the storm neared Cuba on its... 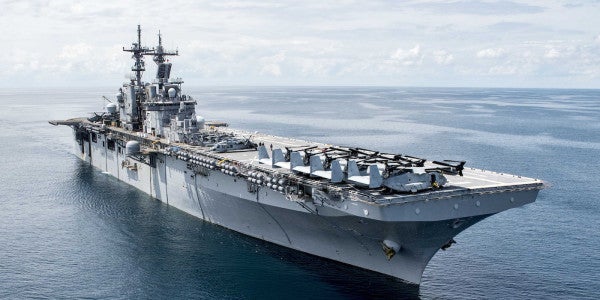 The U.S. Navy has tasked five warships to respond to Hurricane Irma-ravaged areas as the storm neared Cuba on its expected path toward Florida, defense officials said Thursday.

The USS Wasp arrived Thursday in the U.S. Virgin Islands, where aircraft aboard the amphibious assault ship began assisting missions to evacuate critically injured patients from St. Thomas to St. Croix, according to a U.S. Northern Command statement. The Wasp has medium- and heavy-lift helicopters aboard to transport people and supplies.

Two more Navy amphibious warships are expected to join the other three soon in the Caribbean Sea.

The Navy on Thursday was loading the USS Iwo Jima, another amphibious assault ship, and the USS New York, an amphibious transport dock, with supplies at Naval Station Norfolk in Virginia in preparation to embark south toward areas impacted by Irma, Navy officials said.

Hurricane Irma weakened slightly Thursday with sustained winds of 175 mph, according to the National Hurricane Center. The storm boasted 185 mph winds for a more than 24-hour period, making it the strongest storm ever recorded in the Atlantic Ocean. Irma on late Thursday was moving off Hispaniola toward the Turks and Caicos Islands and the Bahamas. The storm was expected to arrive in Cuba by Friday. It could hit the Florida mainland by late Saturday, according to hurricane center models.

At least 10 people have been killed by the storm so far, officials reported. That number is expected to grow incrementally in the coming days.