What Happens When A 4-Star General Is Accused Of Sexual Assault?

The Air Force investigation of sexual assault allegations against a retired four-star general renews a debate about how the military... 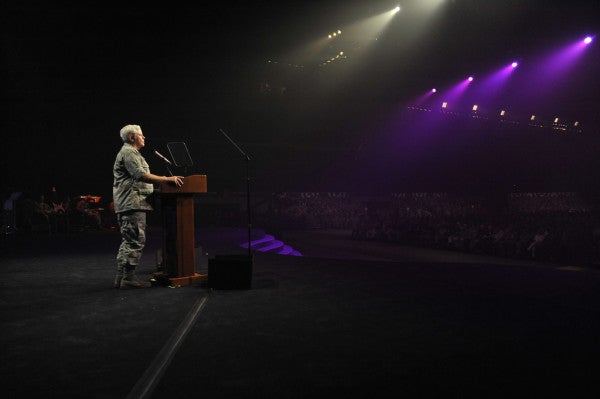 The Air Force investigation of sexual assault allegations against a retired four-star general renews a debate about how the military handles such cases and whether commanders should even have the responsibility of prosecuting one of their own.

Retired Gen. Arthur Lichte, a former commander of the U.S. Air Mobility Command, has been accused by a colonel once under his command of coercing her to have sex with him.

According to military justice experts, there’s very little guidance on how to prosecute such high-ranking officers, and there are significant barriers to doing so.

Generals are rarely brought to trial within the military justice system, much less convicted, and punishment is often just a demotion in rank. Many members of Congress would prefer that independent military prosecutors handle the cases rather than commanders.

Don Christensen, the president of Protect Our Defenders, an advocacy group for military sexual assault victims, based in Washington, said no Air Force general had ever been prosecuted in the nearly 70-year history of the service branch.

Related: The military’s problem with sexual assault is not a data problem »

“This case is a perfect illustration of why you should have independent prosecution making these decisions,” said Christensen, the former chief prosecutor for the Air Force. “It would be a huge bureaucratic nightmare for them to figure out how to prosecute a four-star general.”

Lichte, 67, led the Air Mobility Command, at Scott Air Force Base in southern Illinois, from 2007 until he retired in 2010. The alleged sexual assault took place while he was there.

Linda Card, a spokeswoman for the Air Force’s Office of Special Investigations, confirmed the investigation of the allegations against Lichte but would not comment further or provide additional details about the case.

Victims of sexual assault in the military have two options to report it. They can file a “restricted” report, in which the victim does not identify the attacker and seeks counseling but does not require a criminal investigation. In an “unrestricted” report, as is the case with Lichte’s accuser, the matter is referred to the accuser’s unit commander and triggers a criminal investigation.

But the cases are likely underreported. The Pentagon estimated that nearly 19,000 service members were sexually assaulted in 2014. More than half of those involved men assaulting other men.

Only 5 percent of reported sexual assault cases in the military led to convictions in 2013.

Many service members may think that reporting sexual assault could ruin their careers, said Sara Darehshori, senior counsel for U.S. programs at Human Rights Watch, which has studied sexual assault in the military.

“I’ve heard so many times from people they saw how people were treated when they reported it,” she said. “They didn’t want it to happen to them.”

However, Darehshori said it might make a difference if the accuser were a colonel. A high-ranking officer may have more resources at her disposal than someone lower in the chain.

“When I talk to higher-ranked people,” Darehshori said, “the one thing that I hear often, they feel like they know how to work the system.”

Retired commanders are subject to the Uniform Code of Military Justice, and they would have to be placed back on active duty to go to trial, requiring the Pentagon’s approval.

“Once it starts,” said Rachel VanLandingham, an associate professor at Southwestern Law School in Los Angeles, “he’s just as liable to be found as guilty as anyone else.”

But just getting a case to trial is a major obstacle. That decision is largely in the hands of officers who have little experience prosecuting one of their own.

“Generals who have to decide disposition are used to giving other generals greater deference,” VanLandingham said.

It rarely happens anyway: In 1999, retired Army Maj. Gen. David Hale admitted to lying to his superiors about having affairs with the wives of four of his subordinates.

Hale, a former NATO commander, was court-martialed, fined $22,000 and demoted to a one-star general. He was only the second Army general to face court-martial since 1951.

“They get a reprimand, and the military makes it a big deal that these generals are retiring with one rank less,” he said. “We can’t have this upper class of military leadership that’s not held accountable.”

Sen. Kirsten Gillibrand, D-N.Y., has been leading a so-far-unsuccessful push in Congress to remove the responsibility of prosecuting sexual assault cases from commanders.

Many U.S. allies, including Great Britain, Canada, Australia, Israel, Germany and Norway, have removed reporting of sexual assault from their chains of command.

“They keep just enough of the Senate on their side,” Christensen said of the Pentagon.

A high-profile case involving a colonel accusing a four-star general would almost guarantee a renewed focus from lawmakers on the issue.

“It should be a game changer,” Christensen said, “but the problem is that those who oppose reform are too willing to listen to the Pentagon when they say they’ve got this under control.”