Harrison Ford’s close call at John Wayne Airport on Monday — in which he mistakenly landed on a taxiway as... 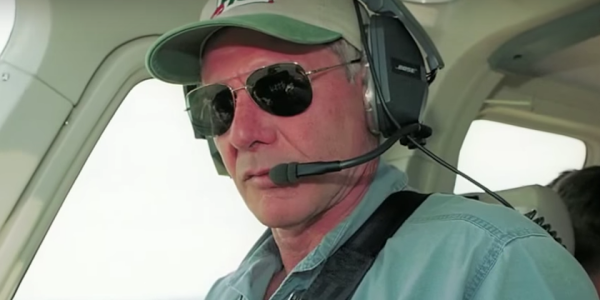 Harrison Ford’s close call at John Wayne Airport on Monday — in which he mistakenly landed on a taxiway as an American Airlines jet was preparing for takeoff — could have easily ended in disaster, aviation experts said, adding that the actor is likely to face some type of disciplinary action.

Air traffic controllers told Ford to land his vintage plane on a runway. But for reasons that are unclear, he landed on a parallel commercial aviation taxiway, flying over the 737 passenger jet with more than 100 onboard. The jet was holding on the taxiway preparing to head to the main runway.

Aviation officials and experts described the incident as highly unusual and troubling.

“This is a very, very high-risk situation,” said Michael Barr, a senior instructor at the University of Southern California Aviation Safety and Security Program. “If he stalled, there would have been a catastrophic result. He flew over a packed airliner.”

The Federal Aviation Administration is now investigating what happened. Ford, 74, has declined to comment about the incident. Regulators said Ford’s movement amounted to a violation of FAA regulations.

Penalties could include a reprimand, retraining, suspension or loss of his pilot’s license, experts said.

FAA inspectors launched the investigation after the “Star Wars” actor had the close call Monday afternoon while at the controls of a single-engine Aviat Husky.

Ian Gregor, a spokesman for the FAA, said landings on taxiways are so infrequent, the agency doesn’t keep data on such incidents.

“These events are rare,” he said. Landing on a taxiway rather than a runway is a violation of FAA rules, he said.

“Speaking generally and not about this incident, any pilot who violates FAA regulations can face penalties ranging from a warning letter to a license suspension or revocation,” Gregor said.

Aviation experts Wednesday said such an incident at a major U.S. airport was almost unheard of.

Several sources with knowledge of the incident have identified Ford as the pilot at the controls during Monday’s landing.

FAA officials have not disclosed the name of the pilot, but Gregor provided a brief narrative.

“Air traffic controllers cleared the pilot of a single-engine Aviat Husky to land on Runway 20L at John Wayne Airport Monday afternoon,” Gregor said. “The pilot correctly read back the clearance. The pilot then landed on a taxiway that runs parallel to the runway, overflying a Boeing 737 that was holding short of the runway.”

“Was that airliner meant to be underneath me?” the pilot asked an air traffic controller, according to a source familiar with the ongoing investigation who was not authorized to discuss details.

Barr, a pilot for 23 years, said Ford should never have landed once he saw the jet.

“When you see the large airliner sitting in front of you at 90 degrees, you should abort the landing,” Barr said, explaining he should have gone around and made another attempt at landing safely.

At airports such as John Wayne with active air traffic control systems, such incidents rarely, if ever, occur, he said. In 1991, an air traffic control error at Los Angeles International Airport led a USAir 737 to land on a runway where a SkyWest commuter plane was taxiing, resulting in 12 deaths on the smaller airplane and 23 fatalities on the jet.

Barr said Ford can expect some action to result from the FAA investigation. “They will do something or it will look like they are giving him preferential treatment based on his celebrity,” he said.

Kurt Knepper, an Orange County aviation attorney, said he had never heard of such an incident at John Wayne in his years of flying there, but he said the layout of the airport made distances between runways and taxiways quite narrow. “This is an anomaly for John Wayne and it is an anomaly for an experienced pilot like Mr. Ford, I am sure,” he said.

Knepper, who handles FAA regulatory matters involving pilots, said the agency could impose a number of penalties but in recent years has preferred corrective action when a pilot is found at fault.

“More than likely here, he will be asked to do some retraining,” Knepper said. “Sometimes it involves administrative probation that doesn’t go on your record.”

Knepper said that as a longtime aviator, Ford’s pilot’s license is not likely to be revoked, assuming he has not been found at fault in previous incidents.

Knepper said the type of plane Ford was piloting may have prevented a clear view of the jetliner because the model typically comes in nose up.

The attorney said the FAA investigator will also review audio and any video of the incident to reconstruct events. “They are also looking at the big picture,” Knepper said.

In 2006, a Continental Airlines 757 mistakenly landed on a taxiway at New Jersey’s Newark Liberty International Airport. A National Transportation Safety Board investigation led the airport to change lighting because the taxiway appeared slightly brighter than a runway.

Ford’s incident comes nearly two years after he crashed a World War II-era plane at a golf course near Santa Monica Airport. According to an NTSB report on the 2015 crash, Ford advised Santa Monica air traffic controllers of an engine failure soon after takeoff and requested an immediate return to the airport.