Civil rights leader Harvey Milk was kicked out of the Navy for being gay. Now the Navy’s naming a ship after him 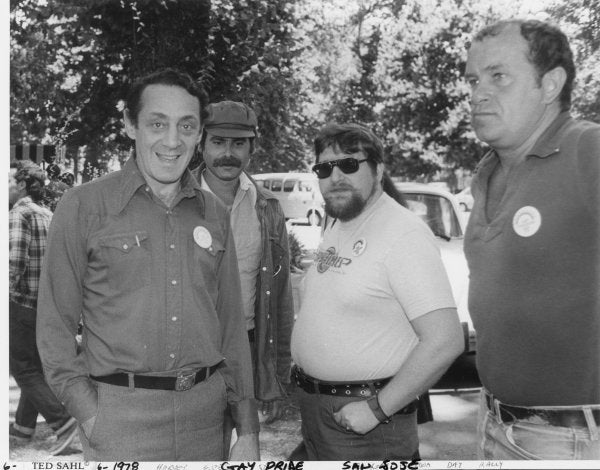 Milk was elected to the San Francisco board of supervisors in 1978 and was assassinated 10 months later by an ex-supervisor. His life was the subject of the 2008 film “Milk.”

Almost 30 years before his election, Milk was a Navy dive officer based in San Diego. His nephew, Stuart Milk, attended Friday's event and said naming the ship after his uncle sends a message to people around the world.

“(This) sends a global message of inclusion more powerful than simply 'We'll tolerate everyone,'” Milk said. “(It says) We celebrate everyone.”

Milk said his uncle was forced to resign from the Navy in the 1950s after being caught in a San Diego park popular with gay men. To be honored now with a ship showed how much things have changed, he said.

Gloria told The San Diego Union-Tribune that progress for gay and lesbian service members has been swift.

“I was a congressional staffer when we were working to repeal 'don't ask, don't tell,' and you think about how difficult a challenge that was,” he said, refer to the military's ban on out LGBT service members that was repealed in 2010.

“Today the Navy's constructing a ship named after the first openly gay elected official in California,” he said. “It shows the progress we're making and a deepening of the commitment the military has to including gay and lesbian service members.”

Nicole Murray Ramirez, the chairman and executive director of the San Diego International Imperial Court Council, an LGBT organization, was a leader in the push to name a vessel after Milk.

“When 'don't ask, don't tell' was lifted, I researched, and one guy picks all these (ship) names — the secretary of the Navy,” Ramirez said.

His organization, which has chapters nationwide, organized a national letter-writing campaign in 2011 to push then-Navy Secretary Ray Mabus to name a ship for Milk.

Fleet oilers like the future Harvey Milk are used to replenish fuel oil and dry goods to Navy ships at sea. The Milk will be the second ship in the new John Lewis class of fleet oilers. The future John Lewis, named for the civil rights leader and congressman, also is being built at NASSCO San Diego.

Kathy Baker, a logistics engineer with 45 years at NASSCO, got to make the ceremonial first cut of steel for the ship. She said it was the first time she had been selected to do so.

“I was shocked,” she said. “I was honored. Felt all the time, effort and hard work I put in all these years was appreciated.”

While the naming of the Harvey Milk is a sign of progress, Gloria said, there is still work to be done. Under President Donald Trump, transgender people are banned from military service.

Stuart Milk told the Union-Tribune his uncle dreamed of a day when members of his community would be accepted, and he knew his advocacy would result in his death.

“I think people should know it's not Hollywood — he did know that he was going to be killed,” Milk said of his uncle. “He didn't know who, and he didn't know when, but it gave him the courage to continue doing what he was doing.”

Stuart Milk carries on his uncle's work as the founder of the Harvey Milk Foundation. He said Friday's ceremony was fulfills one of Harvey Milk's dreams.

“He dreamed of a day like today, when not only would we have the military honoring LGBT, but we have a mayor from the Republican Party and we have everyone that represents the San Diego community coming out,” Milk said. “This would have been un-dreamable for people back in 1978.”