“There was very little evidence of proactive preparation/planning for COVID." 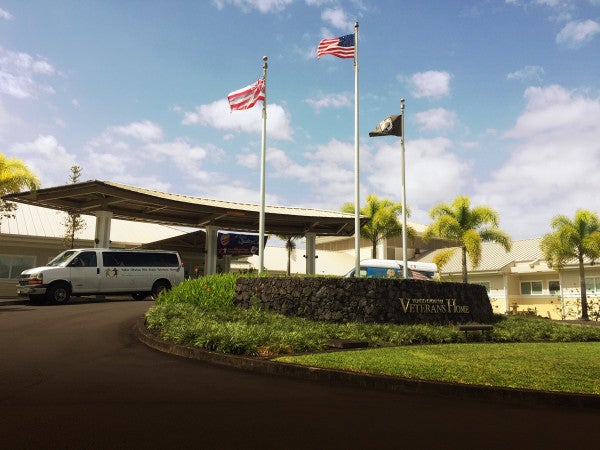 A team of health care professionals from the U.S. Department of Veterans Affairs issued a detailed and sometimes scathing assessment of the sanitary conditions and procedures at the Yukio Okutsu State Veterans Home in Hilo, which has seen at least 18 residents die of COVID-19, the most of any nursing home in the state.

The 16-page report was based on a four-hour visit by the team Sept. 11, three weeks after the outbreak began at the veterans home, which is operated by Avalon Health Care Group, based in Salt Lake City, Utah. The VA assessment was provided to the Honolulu Star-Advertiser on Friday by Avalon along with the company’s written responses.

“There was very little evidence of proactive preparation/planning for COVID,” the report stated. “A basic understanding of segregation and work flow seemed to be lacking even approximately three weeks after the first positive case.”

While some best practices were observed, such as touchless door entry in many areas, effective screening at entry points with clean masks provided before entering, hand-washing sinks at both entrances and reuse of sterilized face shields, many of these “seemed as if they were a result of recent changes,” and not having them in place “from the pandemic onset” was “a major contributing factor towards the rapid spread,” the assessment added.

Some of the VA’s criticisms and its perception of the timing of improvements were disputed by Allison Griffiths, spokesperson for Avalon Health Care, which also manages Avalon Care Center Honolulu in Kalihi and Hale Nani Rehabilitation and Nursing Center on Wilhelmina Rise. Hale Nani is the largest nursing home in the state, with 288 beds; the Yukio Okutsu home has 96 beds.

“The Yukio Okutsu facility had implemented about 60% of the recommendations at the time the VA team came in initially,” Griffiths told the Honolulu Star-Advertiser in a phone interview Saturday.

Since the “early days of the pandemic,” she added, the facility had consistently followed the guidance of the U.S. Centers for Disease Control and Prevention, Centers for Medicare and Medicaid Services and the state Department of Health, keeping pace with changing rules and recommendations.

“But much of the remainder of the VA report, including its recommendations, is an entirely new playbook for nursing homes, going above and beyond the regulations and guidance that nursing homes nationwide and in Hawaii have been relying on.”

Griffiths noted that 40% of COVID-19 deaths in the U.S. had occurred at nursing homes.

That said, “We’re thankful for the support and collaboration of the VA, and are committed to working side by side with the department,” she added, noting that 19 clinical and administrative personnel, including housekeeping and food service staff, from the VA began arriving at the home Thursday and are expected to help on site for up to six weeks.

Avalon responded that staff were not crossing between wings wearing the same PPE in the non-COVID areas of the facility, but in the three wings of the COVID unit, which takes up the home’s downstairs, and “this practice was in accord with CDC guidelines.”

Avalon also specified there was no floating of staff between COVID and non-COVID units.

But in compliance with the VA’s recommendation, the COVID unit has been separated into three sub-units with dedicated staffing, the company said.

Doors of patients’ rooms, which had been left open because closure could have implied imposition of restraints on residents, are now kept closed.

Because many of the ambulatory veterans have dementia or post traumatic stress disorder, Griffiths said, they don’t always understand or comply with masking, social distancing and requirements to stay in their rooms, but the social worker and staff are providing diversional activities.

Related: Why veterans are particularly vulnerable to the COVID-19 pandemic

The assessment reported a social worker’s complaint of exhaustion from extended hours helping with maintenance and feeding due to a shortage of staff members, some of whom were out because they’d tested positive for COVID-19, while others had quit, adding that “the leadership did not appear to share the same feeling of a staff shortage or need for additional staffing.”

It recommended getting more skilled and helping hands on board, including a request that the state immediately provide a “tiger team” of 19 medical and administrative staff.

Also pending are assessments from the Hawaii Emergency Management Agency and the state Department of Health Office of Health Care Assurance.

The VA and state Incident Command Medical Support Team assessments are being prepared for release to the public “within the next day or two,” said Cindy McMillan, spokeswoman for Gov. David Ige, in an email.

The Hilo nursing home, named after a decorated World War II veteran in the 442nd Regimental Combat Team, has had seven health citations over the past three years and an overall “below average” rating from the Centers for Medicare and Medicaid Services, which cited the facility for failing to provide and implement an infection prevention and control program even before the pandemic.