"Never forget Miguel, who embodied what it was to be a true American" 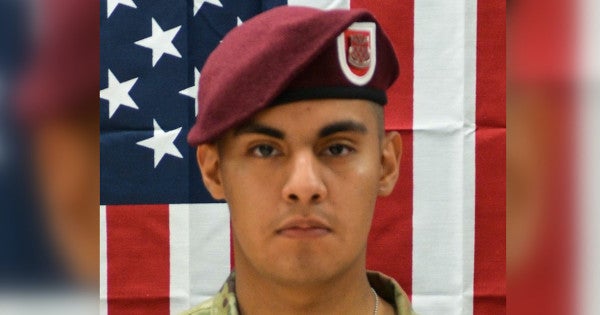 U.S. Army Spc. Vincent DeLao remembered that his friend, Miguel Villalon, never told anyone ahead of time he was going to join the U.S. Army.

DeLao had been Villalon's good friend all the way through East Aurora High School, they were in the Navy Junior ROTC program together, and he ended up driving Villalon to the airport when he was ready to report to the Army.

“He asked me to play Frank Sinatra's 'My Way' on the way,” DeLao remembered Wednesday. “I said, you are an old man in a young man's body.”

The city of Aurora, along with the East Aurora School District, veterans and active military personnel, and family and friends, held a memorial Wednesday for U.S. Army Spc. Miguel Angel Villalon, who was killed Jan. 11 while serving in Afghanistan.

Fittingly, at the end of the event at East Aurora High School, hundreds of members of the East Aurora Navy Junior ROTC unit – the same one Villalon served in for four years – walked onstage, hugged Miguel's mother Olivia Guzman Villalon, and stood at attention, all to the music of “My Way.”

DeLao remembered his friend as “such a positive person.”

“Never forget Miguel, who embodied what it was to be a true American,” he said.

Olivia echoed that sentiment, saying her son was “so proud to be a soldier,” and “so proud to do what was his duty.”

“He gave his life for everyone,” she said. “My son will always be here with me.”

The memorial was filled with presentations in Miguel's honor, from those who worked with him in the NJROTC program to those who never knew him, but got to know him from descriptions and stories from his mother.

One of the latter was Annette Johnson, East Aurora School Board president, who said she did not “have the honor of knowing Miguel.”

Aurora Mayor Richard Irvin praised Villalon for his “bravery” and his “courage.” He said he understood “the phrase service before self.”

“As a solder, you volunteer, you stand up, you raise your hand …” he said. “We will never forget; we must not forget.”

To that end, the mayor presented Olivia Guzman Villalon with a Mayor's Award, and announced that from this day forward, Miguel's birthday, Dec. 31, would be known as Miguel Villalon Day in the city. He also said that beginning this year, the city will hold a special celebration around Memorial Day for Gold Star families in the city – families who have lost someone in war.

There were nine members of Gold Star families at the memorial Wednesday.

In addition to the Mayor's Award, Olivia received gifts of a shadow box with Miguel's awards and ranks, and a paper signed by East Aurora NJROTC members, from the East Aurora unit; a flag from the Illinois Patriot Guards; and an award from the Department of Illinois Military Order of the Purple Heart.

Not to mention the hundreds of flowers from those NJROTC cadets as they filed onstage, hugging Olivia and handing her roses, as “My Way” echoed through the auditorium.