Heart-Attack Victim Wants To Thank Soldier Who Saved Him: ‘I Wouldn’t Be Here Without Him’

Twelve minutes. To hear Mike and Jean McGuire of University Place, Washington, tell it, what transpired in that amount of... 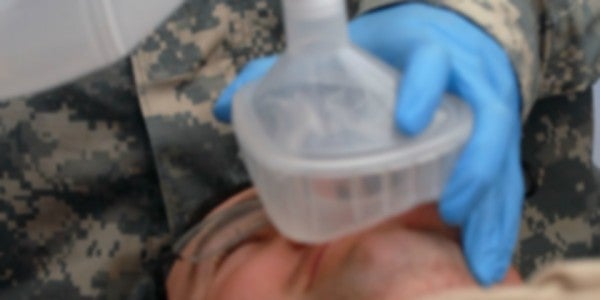 To hear Mike and Jean McGuire of University Place, Washington, tell it, what transpired in that amount of time was nothing short of a miracle. In those 12 minutes a mystery bystander, in the right place at the right time, helped save Mike’s life.

“He was gone,” Jean McGuire, 69, recalled of the moment she wondered whether her husband of 46 years would survive. “There was no breathing.”

Now, the couple desperately wants to meet the good Samaritan who helped save Mike, to express their gratitude and to let him know that if there’s one thing they’re thankful for this Thanksgiving, it’s him.

The McGuires reached out to The News Tribune recently in hopes of telling that story of thanks. I spoke with them this week, and the emotional weight of what they’ve been through still was palpable.

On Oct. 28, the McGuires were walking along the trail at Chambers Bay. They live in the area, and the walk was one the retired couple did on a nearly daily basis, Jean McGuire said.

But the walk on this day was different. Somewhere between the 17th green and 18th tee box, Mike, 68, got dizzy. Before long, he was face down on the paved path, his pulse slight and fleeting.

He was suffering from cardiac arrest.

According to the couple, a group quickly surrounded them. Some people called 911.

Others stepped in to begin performing CPR.

One of them was Keith Kramer. Turns out he’s the fellow who helped make this a joyous Thanksgiving for the McGuires.

For 12 long minutes, with assistance from a doctor who just happened to be on hand, Kramer performed chest compressions on Mike before paramedics arrived — a response slowed by the couple’s location on the course.

A flurry of action ensued once medics were on the scene. Defibrillation and emergency medication was administered before Mike was whisked off to the hospital, with Jean in tow.

In the heat of the moment, Jean said, she didn’t catch the name of the man who’d stepped up to help her husband.

“… I didn’t understand what was going on. A man stepped forward, and I didn’t even see his face,” she said. “I guess that was Keith.”

I was able to get Kramer’s name through a contact at West Pierce Fire & Rescue. I learned he has spent 15-plus years in the Army and currently is stationed at Joint Base Lewis-McChord. He’s also training to be a transit operator with Pierce Transit.

When I reached Kramer this week, he was clearly nervous, telling me bluntly, “I’m not a glory seeker. I don’t like the spotlight. I like to keep in the background.”

Mike McGuire, however, said he’s forever grateful that Kramer did not stay in the background on Oct. 28.

“I wouldn’t be here without him,” he said.

In an effort to fill in the blanks of just what happened, Jenny Weekes, a community and media relations manager with West Pierce Fire & Rescue, forwarded me a statement Kramer provided in the aftermath of the events.

In it, Kramer wrote of beginning his regular workout at Chambers Bay just before stumbling on a scene of commotion and panic. His previous training, including as a member of the military, kicked in, he wrote, and he knew that “we need to start CPR now!”

The instinct was correct. According to Weekes, who relayed notes from the responding paramedics, “bystander CPR made a huge difference in the outcome of this incident, as it takes a while to reach the 17th green.”

As Kramer recalls, those 12 minutes of chest compressions — through the exhaustion and cracking ribs — felt more like “20 or 25.” He acknowledged there were plenty of moments when he feared Mike wouldn’t make it.

Though he’d never used it before, his first aid and CPR training is what kept him going — even when others offered to relieve him, Kramer said.

“This is one of those things, where if you had that kind of training … and it’s your first time on the job, you want to do it right. You don’t want to have something go wrong when you’re attempting to do something good,” he said.

“That’s what was going through my mind,” he continued. “I was petrified. But I just kept on going.”

Mike McGuire is doing well, he says, though he faces a long rehabilitation process. In total, he spent 13 days in the hospital, and he’s still not allowed to be alone — a precaution that’s just fine by Jean.

“I really believe that this was a miracle,” Jean McGuire said. “I really do. I’ve been on cloud nine. It’s just amazing that I have a husband with me.”

Mostly, though, the McGuires are thankful — thankful to have been in the right place at the right time, and thankful that Kramer was there with them.

They soon should be able to fulfill their wish of expressing those thanks to Kramer.

According to Weekes, there are plans to honor him at an upcoming West Pierce Fire & Rescue board of commissioner meeting, though a date has not been set.

For his part, Kramer acknowledged that he “said numerous prayers that day” and left Chambers Bay uncertain whether Mike would survive. He didn’t know the outcome until he received a call from West Pierce Fire & Rescue more than a week later.

“I guess my prayers were answered,” Kramer told me earnestly.

“I’m not in it for any notoriety or anything like that,” he added. “I just felt blessed to help out in the situation. I was just doing my job as a soldier.”