Cadet Timothy Barber and his father Greg shared an infectious smile, buoyant optimism, dedication to service and love of flight.... 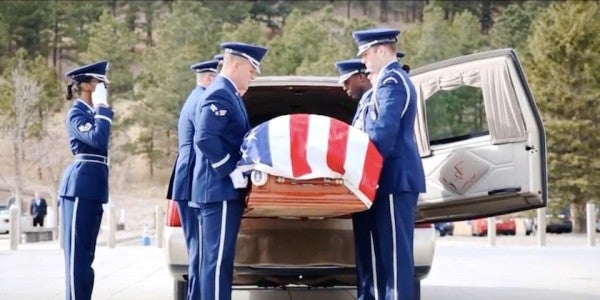 Cadet Timothy Barber and his father Greg shared an infectious smile, buoyant optimism, dedication to service and love of flight.

Eulogists at a Thursday Air Force Academy funeral for the father and son say their similarities made the double blow of their deaths in a Dec. 31 plane crash in Texas even harder to take.

“Our hearts are simply broken by the tragedy of this loss,” Col. Tom Yoder told mourners gathered in the academy's Cadet Chapel to remember the pair.

Timothy Barber, 18, had started at the Air Force Academy last summer as a freshman looking to follow in his father's footsteps. Greg Barber, 55, a retired Air Force lieutenant colonel, was a beloved aviator known as much for his ability to inspire others as his skill in the cockpit.

They were buried side-by-side in the academy's cemetery.

Yoder, an Air Force Academy professor who flew with the father and hoped to mentor the son, said the younger Barber exuded the same charm as his dad.

“There are so many striking dimensions,” Yoder said.

“When someone has your back and is there for you, it means everything,” explained fellow freshman cadet Kayla St. Pierre. “I am extremely grateful to have been his squadron-mate and his friend.”

Greg Barber, who picked up the callsign “Spanky” in his Air Force days, was remembered as an elite pilot who flew the U-2 spy plane and B-52 bomber. He was also known as a dedicated, church-going parent and devoted Boy Scout leader.

“Spanky was without exception the kindest, happiest, most serving man,” Yoder said.

On New Year's Eve, Greg and Timothy Barber took off from an airport in McKinney, Texas, north of Dallas. Their plane was hit by another aircraft, flown by Robert Navar of Frisco, Texas, which was approaching the airport. All three died.

The National Transportation Safety Board is investigating the crash.

The incident led to the first double-funeral and burial at the academy in recent memory. Mandy Barber, wife of Greg and Mother of Timothy, was at the head of a crowd of mourners that included two surviving sons and their daughter.

“Almighty God, I ask for a double portion of your strength,” chaplain Lt. Col. Michael Newton prayed after the two flag-draped coffins were carried into the Cadet Chapel at the academy.

Cadet Barber's squadron stood in stiff formation at a later graveside service. A formation of T-38 training jets like the ones Lt. Col. Barber flew roared over the ceremony.

Two flags were folded and clutched by Mandy Barber as a chilling wind blew.

The tears and the sadness were in contrast to the lives of the father and son, Yoder said.

“Greg and Tim always lived in a bright burn of joy,” he said.