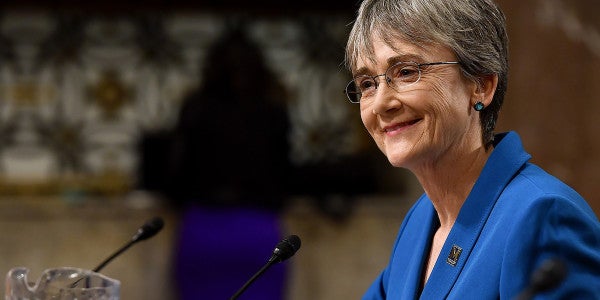 The U.S. Senate voted Monday to confirm Heather Wilson, a former congresswoman and Air Force Academy graduate, to be the next Air Force secretary and first service secretary to serve in the Trump administration.

The Senate voted 76-22 in favor of Wilson, who will replace acting secretary Lisa Disbrow, who has been filling in since Deborah Lee James vacated the position in January.

Mark Green saw growing opposition in the last few weeks from Democrats who became worried his personal views wouldn't bode well for soldiers or potential recruits. During the review process, the decorated West Point graduate came under fire for past unfavorable comments about the LGBTQ community and Muslims.

Wilson received relatively little pushback; the Senate Armed Services Committee on April 5 advanced her confirmation. But sometime in the following weeks, an official told Military.com that a senator — reportedly a Democrat — put a hold on her nomination, with additional questions into her background in regard to a military base in the senator's state.

The hold, which prevents a motion from reaching the Senate floor, was lifted May 3.

During Wilson's committee hearing, Democratic Sens. Jack Reed of Rhode Island and Richard Blumenthal of Connecticut made a point to register disapproval of Wilson's work for Sandia Corp., a subsidiary of Lockheed Martin Corp. that runs Sandia National Laboratories, after she served in Congress.

Blumenthal voted against Wilson on Monday.

Wilson, a Republican, served as a representative from New Mexico from 1998 to 2009. She later worked at Sandia and most recently served as president of the South Dakota School of Mines and Technology.

Wilson was questioned whether she had evidence of her work for the government-owned lab, which assembles and constructs parts for nuclear weapons, with the senators hinting she might have been paid simply to lobby for the subsidiary in contract negotiations.

It's illegal for lawmakers to work in a lobbying capacity for one year after serving in Congress.

Between 2009 and 2013, Wilson made almost half a million dollars working for Sandia.

During her testimony, Wilson maintained she “fully complied with the contract, and I did the work.”

“I submitted substantial work product and worked directly for the laboratories for no less than 50 hours a month,” she said.

When asked if dealing with Lockheed would pose a conflict of interest, Wilson said it would not.

Wilson is the third woman to serve as Air Force secretary after James, who served under President Barack Obama, and Sheila E. Widnall, who served in President Bill Clinton's administration.

Wilson graduated from the Air Force Academy in 1982, part of the third class to include women.