When Helen Miller became one of the first women to serve in the U.S. Army during World War II, she... 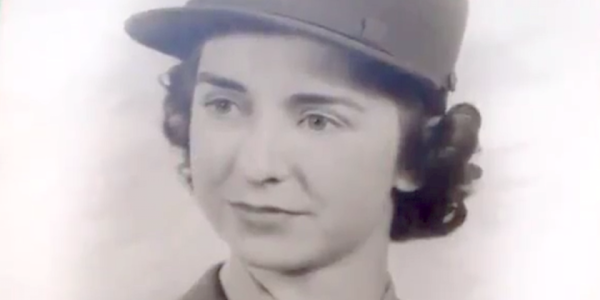 When Helen Miller became one of the first women to serve in the U.S. Army during World War II, she promised her parents she wouldn’t volunteer for overseas duty.

Still, she stepped forward when the Army needed women soldiers in England to support the D-Day invasion. The Woodbury woman later appeared in an Emmy-winning documentary about her military service.

In her 90s, she became a blogger with thousands of followers interested in her stories about a full life and active aging.

Miller died June 17 in a Woodbury hospice. She was 96.

Throughout her life, Miller responded to challenges with a cheerful resiliency. She was born in a house on Grand Avenue in St. Paul and moved 19 times as a child, according to her son, David Christiansen. As a young woman, she survived a life-threatening case of scarlet fever. Later in life, she survived breast cancer.

“I’m a tough old bird!” she wrote of herself.

“She has been a tested soul,” said Margaret Wachholz, a friend. “She was like Teflon. No matter what happened to her, she bounced back.”

Helen at a ceremony in 2015 where she was honored with a grassroots advocacy award for her work with Face Aging MN.

During World War II, Miller joined the Women’s Army Corps (WAC), a pioneering unit created in 1942. It was the first time women who weren’t nurses were allowed to serve in the Army.

Miller was shipped to Great Britain on the Queen Mary, a passenger liner converted to troop ship, which zigzagged across the Atlantic to dodge U-boat attacks.

She was stationed in the U.S. Army Air Forces 8th Fighter Command headquarters outside London, where she helped plot the position of Allied fighter planes on missions to Europe, including D-Day. “She just wasn’t really afraid of anything,” her son said.

Discharged after nearly three years, she returned to St. Paul and married a Navy veteran named Leo Christiansen. Their two sons both served in the military.

When she moved into the Woodbury Senior Living facility, she threw herself into activities including painting, playing poker and planning and performing in skits. She followed the Twins and rooted for a Tiger Woods comeback. An avid golfer, she hit a hole in one when she was 70. She was in her 90s when she caught a 31-inch northern pike.

“She engaged in life wholeheartedly and also lightheartedly,” Wachholz said.

In 2014, Miller’s story was included in a television documentary called “Women Serving In War” that was produced by Twin Cities Public Television and the Minnesota Department of Veterans Affairs. Seventy years after her Army days, she could still sing the WAC marching song about their symbol, Pallas Athena, Greek goddess of war. The show won a regional Emmy.

“She kind of liked her 15 minutes of fame. She wasn’t bashful at all,” Christiansen said.

In 2016, she started “Helen’s Corner,” a blog about her life on the Face Aging MN website. It was followed by 10,300 people, Christiansen said.

In a Face Aging MN video recorded near the end of her life, Miller said, “There’s not much of me left, but what’s left is still kind of feisty.”