2 FDNY Firefighters Were Killed In The Helicopter Crash In Iraq

Three members of the 106th Rescue Wing of the New York Air National Guard in Westhampton Beach were among seven... 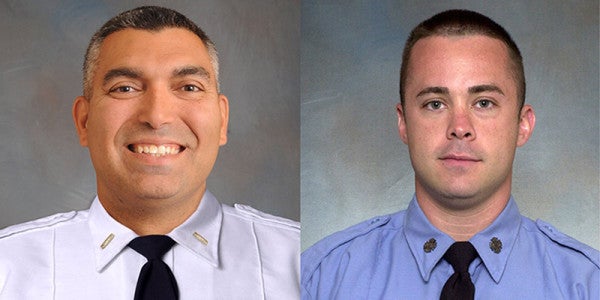 Three members of the 106th Rescue Wing of the New York Air National Guard in Westhampton Beach were among seven service members killed Thursday when a U.S. helicopter crashed in western Iraq, leaving no survivors, according to the family members of the victims.

The HH-60 Pave Hawk helicopter, a modified Black Hawk, was ferrying troops from Iraq to Syria and was not on a combat mission, defense officials said. The Defense Department said the crash, which occurred near the Syrian border, is under investigation but does not appear to be the result of enemy fire.

“This tragedy reminds us of the risks our men and women face every day in service of our nations. We are thinking of the loved ones of these service members today,” said Army Brig. Gen. Jonathan P. Braga, the director of operations for Combined Joint Task Force Operation Inherent Resolve, in a statement.

The victims, who have yet to be formally identified by the Pentagon, include the two members of the FDNY — Lt. Christopher Raguso of Commack and Christopher “Tripp” Zanetis of Long Island City — and Dashan Briggs of Port Jefferson Station, a former All Division football star at Riverhead High School.

All three were stationed at Francis S. Gabreski Air National Guard Base in Westhampton, according to family members.

Raguso is a 13-year veteran of the FDNY stationed in Queens while Zanetis, a fire marshal, is on leave from the department, which he joined a decade ago. He was a lawyer with a Manhattan law firm.

“They are truly two of New York City’s bravest — running into danger to protect and defend others, both in New York City and in combat overseas,” said New York City Mayor Bill de Blasio.

Raguso and Zanetis are the first members of the FDNY to die while in active military service since Nov. 29, 2004, officials said.

Briggs, a married father of two young children, served full-time with the 106th.

In a tweet Friday, President Donald Trump offered condolences to the victims.

“Our thoughts and prayers go out to the families and loved ones of the brave troops lost in the helicopter crash on the Iraq-Syria border yesterday,” Trump tweeted. “Their sacrifice in service to our country will never be forgotten.”

Raguso, who celebrated his 39th birthday the day before the crash, was also a lieutenant in the Commack Fire Department.

The 106th, which has about 1,000 members — roughly 90 percent from Long Island — has been regularly deploying to war zones since George W. Bush first began sending troops to Afghanistan following 9/11, according to New York National Guard spokesman Eric Durr.

“The service members in this unit selflessly deploy around the world to provide combat search and rescue coverage for United States and allied forces,” said Suffolk County Executive Steve Bellone.

The 106th Rescue Wing has a long and storied history.

The unit was portrayed in the movie “The Perfect Storm”; they located John F. Kennedy Jr.’s plane in 1999 after it crashed into the Atlantic Ocean; and they were first on the scene of the explosion of TWA Flight 800 in 1996. The unit was also responsible for at-sea rescue operations during NASA’S shuttle launches until that program ended in 2011.

And last August they were deployed to help hurricane victims in Louisiana and Texas. The unit sent three helicopters, a plane, rescue teams, maintenance and support staff, several boats and watercraft.

A month later, members of the unit deployed to Puerto Rico to help with rescue operations in storm-ravaged Caribbean.

The crash comes one week before the families of deployed 106th personnel were scheduled to gather for a March 24 “Yellow Ribbon” event, where participants assemble care packages for the deployed troops.

On Friday, loved ones of unit members deployed to the Middle East waited anxiously for details of the crash.

Michael Attanasio of East Islip said his son, Scott, 23, a National Guard mechanic, was on his first deployment when he left with the unit in January.

Attanasio said that members of his family were “a mess” as they awaited word from Iraq. On Friday afternoon, Attanasio said he was somewhat relieved after an official from the air base called to say that his son was “good.”

But Attanasio said he had not heard from official channels, and that the wait remained tense. “It’s not over until I hear from him,” he said.