Here’s What We Know About James Fields, The Charlottesville Suspect

Violent clashes between white nationalists and counter-protesters in Charlottesville, Virginia took a deadly turn on Saturday when a driver plowed... 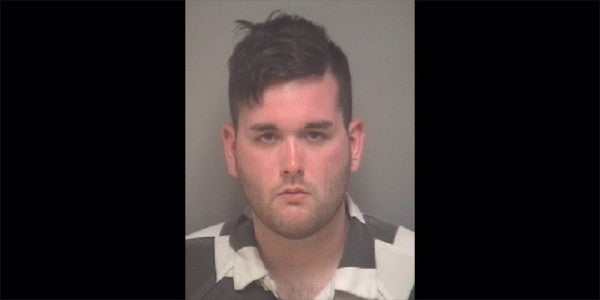 Violent clashes between white nationalists and counter-protesters in Charlottesville, Virginia took a deadly turn on Saturday when a driver plowed his vehicle through the crowd, killing a 32-year-old woman and injuring several others.

The police on Saturday evening identified the suspected driver of the car as 20-year-old James Fields. The police told media they were holding him on suspicion of second-degree murder, three counts of malicious wounding, and one hit-and-run count.

Fields grew up in Kentucky and recently moved to Ohio, his mother, Samantha Bloom, told The Associated Press. She knew he was attending the “Unite The Right” rally this weekend and that he supported President Donald Trump, but said she didn't know it was a white nationalist rally.

“I thought it had something to do with Trump. Trump's not a white supremacist,” Bloom told AP reporters. She added that she didn't “get involved” with her son's political views.

His aunt, Pam Fields, told The New York Times on Sunday that James Fields' father died before he was born, and she described her nephew as “a very quiet little boy.”

Bloom's neighbor similarly said Fields was a quiet teenager who kept to himself and had trouble making friends.

Caitlin Robinson, one of Fields' middle school classmates, described him as an “outcast” and told the Times that his extremist views took root years ago.

“On many occasions there were times he would scream obscenities, whether it be about Hitler or racial slurs,” Robinson said. “He wasn't afraid to make you feel unsafe.”

Derek Weimer, a history teacher who taught Fields during his junior and senior year at Randall K. Cooper High School in Kentucky, told the Washington Post that Fields was infatuated with Nazism as a teenager.

“It was obvious that he had this fascination with Nazism and a big idolatry of Adolf Hitler,” Weimer said. “He had white supremacist views. He really believed in that stuff.”

Fields is a registered Republican and voted in the November election, according to BuzzFeed.

BuzzFeed also reviewed a now-deleted Facebook page that reportedly belonged to Fields, finding several photos that reflect alt-right views, in addition to a baby photograph of Adolf Hitler and a meme of Pepe the Frog, which was adopted as an alt-right symbol during the 2016 election.

Several posts on Fields' apparent Facebook page contained clear references to Nazism and the concept of “racial purity.” There were multiple photos that showed Fields' support for Trump as well, including a “Make America Great Again” banner and an illustration of Trump sitting atop a throne.

On Saturday, the Anti-Defamation League shared a picture of Fields holding a black shield belonging to the white supremacist group, Vanguard America.

But Vanguard America denied any connection to Fields and said he was not a member of the organization.

Attorney General Jeff Sessions said in a statement late Saturday night that the US Attorney's Office for the Western District of Virginia and the FBI's Richmond field office were conducting a civil rights investigation into the crash death.