“Nasally.” “Straight-from-the-throat.” That’s how Staff Sgt. Jake Bublitz described using his voice during his first cycle as a drill instructor... 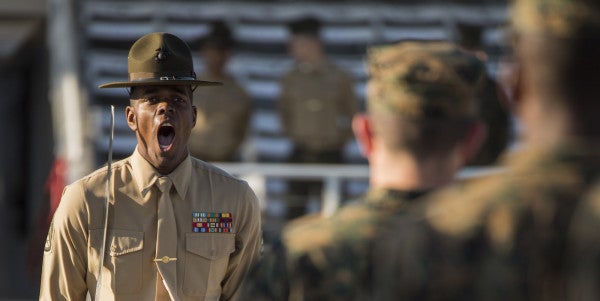 It was a case of “what-not-to-do,” Bublitz, now in his third cycle training recruits on the island, recently said.

“It took me a long time to get my voice to rebound when it was over,” he said, his voice hoarse and threatening to vanish, three weeks into the 13-week training cycle.

Drill instructors call it “frog voice” — that raspy effect they develop from yelling commands to recruits, yelling at recruits and, sometimes, just yelling. Yelling for hours and days and weeks on end. Yelling so much that, sometimes, all that comes out is a croak.

While frog voice is an oft-joked-about feature of the depot’s aura, drill instructors such as Bublitz don’t take it lightly — all that yelling can have serious health consequences. At the depot’s Drill Instructor School, Marines learn techniques for safeguarding their bodies and vocal chords. And some drill instructors say the hardest part of their day is coming to work with sore throats and no voices — and knowing they’re going to have yell for 18 straight hours.

That’s what Staff Sgt. Thomas Phillips told Task & Purpose: “Honestly, the worst thing ever wasn’t waking up at three in the morning,” he said during a May 2016 interview that offered a behind-the-scenes glimpse at what it’s like to be a drill instructor. “(I)t was getting to work, parking my truck, and walking to the squad bay knowing I had to yell again.”

It’s not uncommon for drill instructors to spit up blood, Phillips said.

“Drill instructors literally scream so hard at recruits that they can pass out, give themselves hernias, or do serious and permanent damage to their vocal chords,” according to the Marine Corps Times.

To combat these ailments, drill instructors in training learn methods for projecting their voice and preventing injury.

Bublitz said veteran drill instructors taught him how to speak from his diaphragm and squeeze his lower abdominal muscles to be loud and clear, and to stave off a hernia.

Another technique: situational awareness. If you’re directing a platoon of about 100 recruits, Bublitz said, you have to realize where you’re standing in relation to platoon guide — the recruit leading the platoon — and how many recruits have their backs to you. If you’re yelling at someone’s back and from a distance, it’s harder for them to hear you.

Finally, Bublitz said some of his mentors taught him to yell commands with economy: “I try to limit the communications with recruits down to three to five words, unless you’re actively teaching something,” he said.

And if you teach trainees right the first time, he said, you can be even more efficient.

“Prime example: going to the chow hall,” he said.

“I told my recruits at the very beginning I’m going to say, ‘Stacks!’” he said, explaining the command for trainees to un-sling their rifles and prop them against each other, then remove their backpacks.

“It’s just a one-word command, and they know it from the very beginning.”

During training cycles, drill instructors might use lozenges, hot water with honey and lemon, hot tea followed by a cold drink or even pickle juice to treat their strained throats, according to the Marine Corps Times.

Bublitz stays away from the lozenges and processed sugar.

He drank deeply and often from a large jug of water as he talked about his voice, which he’s trying to safeguard ahead of his upcoming performances.

Bublitz is a singer-songwriter on the side.

He was a recent finalist in a national music competition for veterans sponsored by financial corporation USAA and media site We Are The Mighty.

He’s got an album coming out soon.

And he’s got a gig coming up this month.