Don’t tell Army’s head football coach Jeff Monken, or anyone else from Army, that the Black Knights can’t beat the... 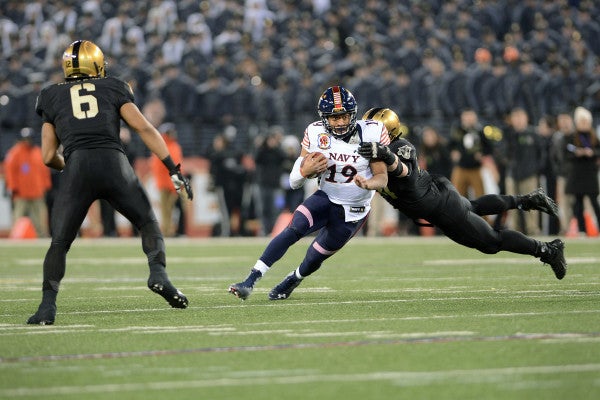 Don’t tell Army’s head football coach Jeff Monken, or anyone else from Army, that the Black Knights can’t beat the Navy Midshipmen. When Monken first arrived two years ago, the first thing the former Navy assistant did was change the culture of Army football from one of despair to belief.

Monken had signs placed all over the Army practice facility with the simple mantra of “Beat Navy!” It was a small first step in what the second year head coach believes is the path to change the course of Army’s 13-year losing streak against Navy.

“It’s a process,” Monken said in a 2014 interview. “You need to have a vision for the future and then you must stay the course and work really hard to see that vision become a reality.”

Defeating Navy in the 116th meeting between the two teams would make that vision a reality, but the task appears to be a tall order.

Navy currently owns a 13-game winning streak over the Black Knights dating back to 2002. A 14th win would give the Midshipman 10 total victories in the 2015 season, tying the school record. They enter the game ranked No. 21 in the Associated Press and college football playoff rankings and have a legitimate Heisman Trophy candidate in quarterback Keenan Reynolds — even though the race has seen some recent controversy. Reynolds is ranked No. 1 in the fan vote despite the fact that ESPN experts’ poll removed him for a period of time from the Nissan Heisman fan ballot and fans got hot.

Even the Army–Navy game intangibles seem to be in Navy’s corner. The Midshipmen recently unveiled their game day uniforms, complete with hand-painted helmets, to high praise. Navy’s annual spirit spot plays off the popular 2015 Star Wars return and crushes Army’s Katy Perry “Dark Horse” themed-music video from last year. The 2015 Army attempt is a much more professional production, but war tubas are no match for the Force.

However, cool uniforms and awesome spirit spots don’t score points or win football games. And everybody is well aware that for America’s Game — the greatest rivalry in college football — records and streaks can be thrown out the window as well.

Here are some of the key matchups expected in the Dec. 12 game.

Army’s linebackers will need to play sound football against the Navy offense. A large factor in stopping the triple option will be ensuring the linebacker corps plays assignment football and disrupts Reynolds ability to make sound pitch decisions.

Forcing the Midshipmen to abandon the running game and throw the ball early and often has been Navy opponents’ best chance for success. It will be up to Timpf and King to set the tone early in the game and dictate how Reynolds will distribute the football.

No, not the famous American writer and poet who wrote “The Raven,” although he did attend West Point for a time way back in 1830 before being kicked out. This Edgar Poe is known for spectacular catches like this 65-yard touchdown catch he hauled in against Rutgers. The Black Knights primarily run the ball, but a quick strike option to the big receiver might be a surprise for the Mids and could provide an interesting matchup against a smaller secondary.

Army’s best chance to win is to keep the game close by stopping Navy’s rushing attack, avoiding turnovers, and making a momentum-shifting, special teams play. Last year’s defense held Navy to 205 rushing yards and kept Army within striking distance on the scoreboard. However, Army quarterback AJ Schurr’s fourth quarter fumble at the Navy 38 yard line cost the Black Knights the opportunity for any type of comeback.

Momentum shifts in this type of game play a huge role and a great special teams play could propel that momentum in Army’s favor. Last year, the Black Knights blocked a Navy punt for the first score of the game. Earlier this year, Army blocked a punt and returned it for a touchdown against Tulane. The Army special teams are capable of making big plays and they will need one to get ahead of Navy.

Navy wins with solid play on defense and by allowing Reynolds time to make decisions, whether it is by running the triple option or making well-timed passes through the air. In Navy’s most recent game against Houston, the Cougars took away the Navy running game. The senior quarterback promptly adjusted and instead threw for a personal best, 312 yards, and scored his 83rd career touchdown to match the Football Bowl Subdivision record set by Wisconsin's Montee Ball.

Points will come for Navy’s vaunted triple-option offense, but the surprise factor this year has been the Navy defense. This season, Navy has held opponents to an average of 21 points a game and is currently ranked No. 1 in the American Athletic Conference in turnover margin. Making stops and creating turnovers that give Navy’s offense more time on the field is a big reason the Midshipmen have had so much success this season.

I predict the Black Knights will come out fired up and do their best to stop Reynolds from making any big time plays. However, the speed and athleticism of Navy will overpower any Black Knight emotion and the Midshipmen will pull away comfortably in the second half.

I also predict Reynolds will have to hurriedly change into his service dress blues on the way to a Black Hawk helicopter that will fly him to that evening’s Heisman Trophy ceremony in New York City. Sadly, Army will have to wait at least one more year to break the streak.