LONDON — Police conducted a raid on a block of flats in Barking, London, on Sunday morning as part of... 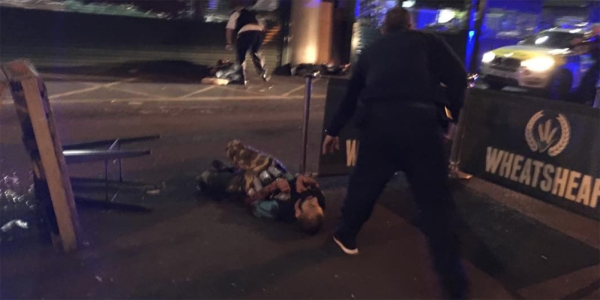 LONDON — Police conducted a raid on a block of flats in Barking, London, on Sunday morning as part of the investigation into the terror attacks on London Bridge and Borough Market last night.

The East London neighbourhood is home to many Muslims and it is common to see women wearing the burka there.

Twelve people were arrested in the raid. Locals told Sky that they recognised a neighbour as the suspect who had been killed by police last night. One suspect, seen in the image above, wore a close-cropped beard and wore an Arsenal away football shirt.

The Guardian also reported that neighbours recognised at least one of the men:

Furqan Navi, who lived in the block raided by police in Barking this morning, said he recognised his neighbour as one of the attackers lying dead in Borough Market after he had been shot by armed police.

“He lived there with his wife and two children, he’d been there for about three years. He seemed pretty friendly but I didn’t know him,” Navi said.

Another neighbour said he had seen the man two days ago. “He seemed a friendly, cool sort of guy. He was friendly and liked playing with kids. He was in his 20s I guess.”

Another neighbour told The Times that he recognised the dead attacker in the Arsenal shirt:

Seva Litvjakovs, a neighbour, said the man was called Mohammed, known locally as Abs. “I spoke with him yesterday, about 5pm,” he said. “He seemed to be tidying up his car, taking stuff out. He was with two other guys. He was wearing his Arsenal shirt. I just said ‘hi’ and asked if he was OK. He said everything was fine. He had a British accent. His beard was longer, bushier .

“I have always found him very friendly but my missus said he was a bit strange. I heard him once telling off some local kids who were being noisy. He said, ‘We are Muslims we do not behave like that’. Someone said they had seen him on television a while back talking about religion.”

Here is the Metropolitan Police's statement on the arrests this morning.

This story is developing …