Four Coast Guard members who faced extraordinary conditions while saving an infant, a pregnant woman and dozens more during a powerful 2017 storm have been awarded prestigious medals for their heroism 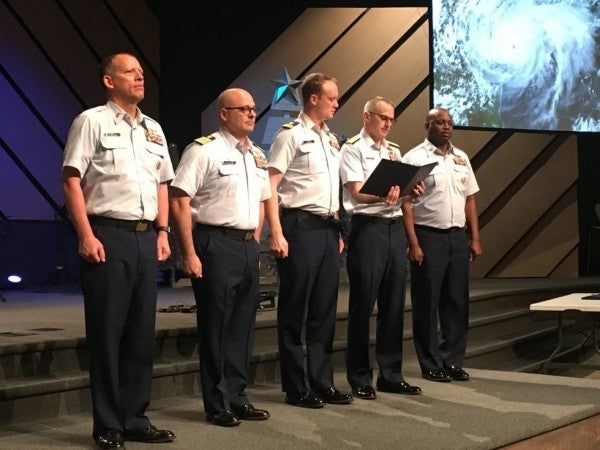 Four Coast Guard members who faced extraordinary conditions while saving an infant, a pregnant woman and dozens more during a powerful 2017 storm have been awarded prestigious medals for their heroism.

Gantt, Briggs and Sanborn were each presented with the Distinguished Flying Cross last week. Yockey received the Air Medal for his actions.

The awards were presented by Rear Adm. John Nadeau, commander of the Eighth Coast Guard District. The district is headquartered in New Orleans and is responsible for missions along the Gulf of Mexico's U.S. coastline, where Hurricane Harvey dumped as much as 60 inches of rain — the most of any recorded weather event in the country.

Over two weeks in late summer 2017, the Coasties flew daring helicopter rescue missions to reach people who were trapped as Hurricane Harvey pummeled Texas and Louisiana.

Gantt, a rescue swimmer serving aboard MH-65D search-and-rescue helicopters, once headed straight into rushing floodwaters to rescue an infant who'd been swept away from his father. It involved the crew “descending rapidly below the power lines and trees from 150 feet to 25 feet to minimize the risk to the infant,” according to his award citation.

After saving the baby, Gantt spotted others in a home being engulfed by floodwaters, the citation adds.

“Without the use of a chainsaw, he tore through the roof to extract and hoist the seven people to safety before water overtook their home.”

He was ultimately responsible for rescuing 59 people, according to the Coast Guard.

That included reaching a pregnant woman in need of medical care — the first person the Coast Guard helped rescue during the deadly storm. With wind speeds closing in on 100 mph one night, Gantt swam into an unfamiliar area to reach the woman, who was trapped in her attic, the citation states. That included being placed between high-voltage power lines and 100-foot trees to reach her roof.

“Battling severe turbulence while performing the hoists, Petty Officer Gantt was repeatedly deployed from over 150 feet through a small opening between active power lines to search for and triage the ill woman.”

Briggs, an aircraft commander on Gantt's helicopter during those rescues, is credited with helping to save 120 people. Facing life-threatening weather when trying to reach the pregnant woman trapped in her attic, the crew “endured multiple aircraft emergencies during the rescue of additional family members,” his Distinguished Flying Cross citation states.

“The combination of losing critical avionics, communication failures, the loss of aircraft stabilization systems, and the violent motion of the aircraft due to unprecedented [92 mph] winds made maintaining a hover an aeronautical feat,” it adds.

Sanborn is credited with saving two dozen people — including his own comrades. He flew a degraded Coast Guard MH-65 “between numerous severe thunderstorm bands to rescue three aircrew surrounded by floodwaters on an elevated helipad.” He saved another stranded rescue swimmer by hovering in a flooded parking lot.

“Due to the waist-deep water, he precisely positioned the aircraft at the water's surface to prevent the loss of the aircraft while onloading aircrew. In the following days, Commander Sanborn flew 14 hours of rescue operations in ceilings as low as 100 feet with one quarter mile of visibility, navigating between towers and over high-voltage power lines to rescue citizens in distress.”

During a particularly perilous night mission with a critical fuel state and deteriorating weather conditions, Sanborn rescued 11 people who'd been without food or water for several days.

He levered 100% of the aircraft's power to hover while hoisting the maximum weight allowed amid speedy wind gusts causing the aircraft to move violently, the citation states. Like Briggs, Sanborn's ability to maintain control of the helicopter was considered an “aeronautical feat.”

Yockey guided the swimmer, who reached a disabled woman trapped in her apartment with floodwaters up to her neck, “through live wires and light poles, with the knowledge that the slightest error could jeopardize the summer and survivor's lives.”

Other times, he guided a rescue basket and swimmer through live power lines and other debris to reach 16 people. Yockey then “guided the aircraft to land in an intersection, surrounded by traffic lights, vehicles and power lines, to reach an elderly diabetic patient in need of emergency dialysis.”

Each of the Coasties was credited with displaying courage, judgment and devotion to duty.