‘He’s An American … And He Had A Mom,’ Says Former SEAL At Bergdahl Trial 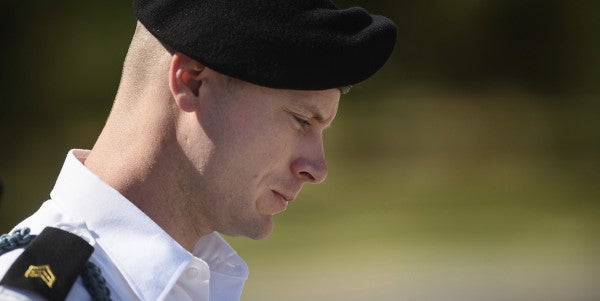 Retired Senior Chief Petty Officer James Hatch, a former Navy SEAL, on Wednesday described the blasts from an AK-47 popping around him during a rescue mission for Army Sgt. Bowe Bergdahl.

“I could hear shrapnel breaking over my head,” said Hatch, who was shot during the mission. “I really thought I was dead.”

Hatch was one of several witnesses to testify during Bergdahl’s sentencing hearing on Fort Bragg. A judge will decide whether Bergdahl spends the rest of his life in prison for desertion and misbehavior before the enemy. He pleaded guilty to those charges last week.

Bergdahl, who walked off his post in 2009 and was held prisoner by the Taliban for nearly five years, could face up to life in prison without parole for misbehavior before the enemy. The judge has said he would combine the charges for sentencing purposes.

There is no pre-trial agreement regarding sentencing.

Hatch, who limped to the witness stand with his dog Mina by his side, became emotional during parts of his testimony. His face reddened and he paused to compose himself as he described how the enemy shot Remco, a military working dog that was with him on the mission.

Bergdahl sat straight, looking down during most of Hatch’s testimony.

When asked if he understood the circumstances of Bergdahl leaving his post, Hatch said everyone in Afghanistan knew that he had walked away.

Asked why he went looking for him, Hatch said: “He’s an American.”

“He was an American, and he had a mom,” Hatch said.

Billings told the court that he initially thought it was a joke that Bergdahl had gone missing.

Billings said he and nine others searched for the missing soldier.

“Our main mission was to bring Bowe home,” he said.

When asked why he conducted the missions, Billings replied: “It’s a Ranger motto. We leave no man behind. … We bring them home period.”

On the day Bergdahl walked away, soldiers at Observation Post Mest searched the nearly one-acre outpost, including its bunkers, to find the soldier.

Evan Buetow, a sergeant who was Bergdahl's team leader at the time, said he remembered checking the tent where Bergdahl slept and saw his equipment was still there. A few days earlier, he said, Bergdahl asked him how to mail his computer home and how to get cash from the finance office.

For the next few days, Buetow described how he and others were part of search efforts in conditions so austere soldiers became ill. They would often operate on limited sleep, food and water, he said. Several soldiers got sick with dysentery.

But, he said, the soldiers understood the critical mission of searching for Bergdahl.

“My guy was gone,” Buetow said, putting his hand over his face as he became emotional.

Col. Clinton Baker, who was Bergdahl's battalion commander at the time, testified to the intense search missions. The operation tempo drastically increased after Bergdahl disappeared, he said.

One unit conducted patrols for 37 days straight and had to be delivered socks and T-shirts because their own had become so soiled, he said.

“There was no one that wasn't out,” Baker said. “We were doing everything we could.”

“In our minds, based on what we knew, the Taliban was going to move as fast as they could to Pakistan,” he said.

As part of the search efforts, several different aircraft were called to assist.

Retired Col. John White, who was an aviation officer at the time, said aircraft were constantly flying on missions, stressing the maintenance of the aircraft as well as the pilots. For a typical daytime mission, he said, pilots are restricted to nine hours of flying, but on the first day, White said he flew 13 hours.

White said he chose to extend his flight hours so younger officers would not have to take those missions.

“I saw what we were doing … we're going to get into risky things,” he said. “I thought, I need to stay out there.”

The hearing is scheduled to resume Thursday morning.