High Costs Loom Amid Calls For A Larger Navy

The Navy has been shrinking for decades and the number of active-duty ships is now 14% less than what it... 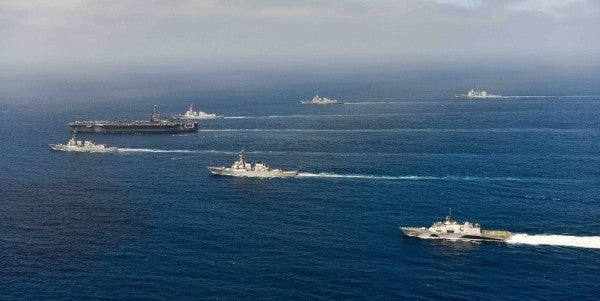 The Navy has been shrinking for decades and the number of active-duty ships is now 14% less than what it was on Sept. 11, 2001. The debate about the necessary number of Navy ships centers around global security versus federal costs.

The Heritage Foundation’s 2015 Index of U.S. Military Strength determined that the number of ships needed to counter global threats is 346, but current ship numbers are far below that, and even planned ship construction puts that benchmark a long way off. The Navy currently has 273 active-duty ships, and the Obama administration’s budget calls for that to grow to 308 by 2022 and 321 by 2028. To get to roughly 350 ships — the number necessary to counter and deter global threats — Mitt Romney proposed a plan to reach this goal by producing 15 new ships per year.

The Congressional Budget Office estimates that the current shipbuilding costs are about $18.9 billion annually, and a 15-ship-per-year budget could cost taxpayers as much as $28.4 billion annually. And here’s the catch: that’s just ships and doesn’t take into account the costs of additional manpower, training, equipment, and support necessary to keep a fleet of that size operational and effective.