It's been more than eight years since his son, Navy Petty Officer First Class Michael J. Strange, was killed alongside 29 other U.S. soldiers and eight Afghan security forces on America's deadliest day of the war in Afghanistan. His father's anger remains 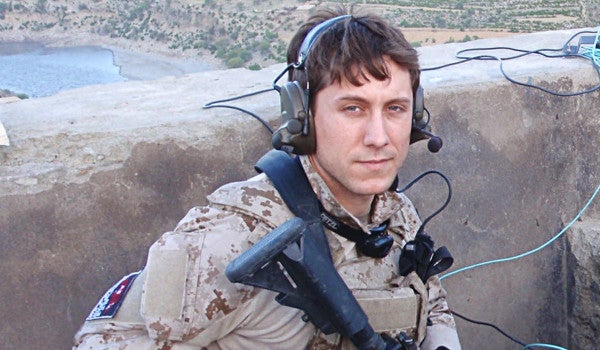 PHILADELPHIA — It would not be accurate to say that Charles Strange felt a surge of anger when he read a newspaper report this week of evidence that U.S. military leaders misled the public about the war in Afghanistan.

No, for the Montgomery County father, the anger's always there, like a tiny earthquake rumbling below the surface. The intensity changes daily, but it never really goes away.

It's been more than eight years since his son, Navy Petty Officer First Class Michael J. Strange, was killed alongside 29 other U.S. soldiers and eight Afghan security forces on America's deadliest day of the war in Afghanistan. The crew, which included the 25-year-old Michael, were killed when Taliban fighters shot down their helicopter, Extortion 17, while they were carrying out a mission in a valley southwest of Kabul on Aug. 6, 2011.

Michael was a cryptologist and part of the elite Navy SEAL Team 6, the unit responsible for killing Osama bin Laden. At his core, though, he was a Wissinoming native, a graduate of North Catholic High School, and a “Philly boy” through-and-through.

This week, Charles Strange and his wife, Mary Ann, Michael's stepmother, sat in their home in Hatboro, parsing through the Washington Post's reporting on the Afghanistan Papers, which said what the Strange family has long thought: Military leadership can't always be trusted.

“This is what you get when your son dies: a pin and a flag,” he said, his Gold Star pinned to his chest. “And lied to.”

Seen by some as the Pentagon Papers of our time, the reporting was based on a trove of documents outlining hundreds of interviews conducted by the Office of the Special Inspector General for Afghanistan Reconstruction (SIGAR) to prepare public “Lessons Learned” reports. The documents were obtained by the Post via a Freedom of Information Act request and a years-long legal battle.

The reporting suggests U.S. officials publicly stated they were making progress in Afghanistan despite strong evidence to the contrary. Experts say the Afghanistan Papers also show the United States was engaging in nation-building efforts without an understanding of the overall mission, the Taliban and its motivations, or the country of Afghanistan itself. The interviews suggest America's longest war lacked a cohesive strategy under multiple administrations made up of officials who systematically misled the public.

Plenty of veterans of the 18-year conflict, along with their families, have been reluctant to publicly criticize the ongoing war effort for fear of coming across as unpatriotic. The Stranges, on the contrary, have immense pride in their country. They're dedicated to supporting men and women who serve, and established a foundation in Michael's name to support other Gold Star families.

They instead see the war in Afghanistan and the circumstances surrounding Michael's death as a failure in leadership.

So this week, they read and reread the Post's reporting in the same house where they have collected thousands of pages of partially redacted documents that are supposed to tell the story of how Michael was killed. The documents aren't sufficient, the Stranges say.

For them, big questions remain, like: Why were a group of Navy SEALs flying in a decades-old helicopter over a valley known to be an enemy stronghold just months after the same unit killed bin Laden? Why did officials seemingly change their story about the existence of a black box in the helicopter? Why was Michael cremated without his family's permission? And why were they told his body was badly burned when an autopsy photo showed otherwise?

Top military brass attempted to answer some of those in testimony before a congressional subcommittee in 2014. But the revelations about the lack of clarity of the overall mission in Afghanistan only add more lingering questions for Charles Strange.

The most nagging: Why did Michael die?

“Nothing will bring my son back, but I would like to know,” he said, “so this doesn't ever happen to somebody else's son.”

It's the allegations of lying in the Afghanistan Papers that hurt most. For example, despite public proclamations that relationships between the U.S. military and Afghan security forces were strong, a U.S. soldier told SIGAR that the Special Forces teams — like the one Michael served on — “hated” the Afghan police and called them “the bottom of the barrel in the country that is already at the bottom of the barrel.” Another officer said a third of police recruits were “drug addicts or Taliban.”

Michael had never said anything that harsh — he was mostly quiet about his work — but Charles said his son had relayed that there were major trust issues.

It was these sentiments that have fueled some of Charles Strange's theories about Extortion 17, which doesn't appear to be mentioned in the Afghanistan Papers, though the documents are partially redacted. He and some of the other relatives of those killed in the crash have suggested they believe Afghan security forces tipped off Taliban fighters that Navy SEALs were flying overhead.

Military officials have disputed this, saying the downing of the helicopter in the middle of the night amounted to, more or less, a fluke.

Other portions of the Post's reporting were familiar to Charles Strange, specifically revelations that nation-building efforts in Afghanistan were unsuccessful on a variety of fronts. U.S. officials told SIGAR, for example, that while its dreams of developing a strong economy and reliable security forces were failing, Afghanistan became the world's largest source of opium.

Michael had mentioned this, too, saying he'd seen poppies growing on plots the size of football fields.

More from that story was eerily familiar, so Charles Strange looked for support this week, sharing the link in a group text he's in. It's for a club no one wants to be a member of.

“I've known this a long time,” replied another Gold Star father. “This is a difficult pill to swallow.”