A total of 65% of the veterans at the Holyoke Soldiers Home have now contracted the coronavirus and at least 38 have died of the virus in the past three weeks. 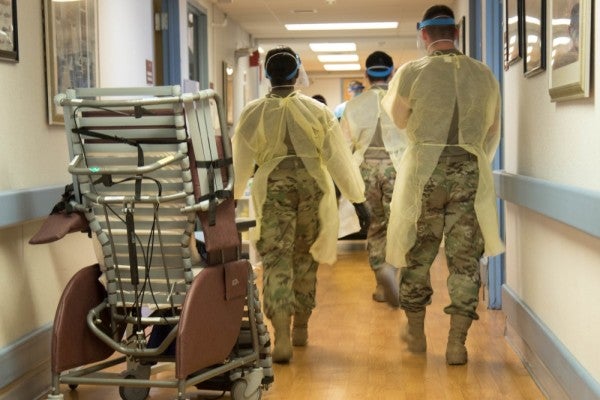 HOLYOKE – A total of 65% of the veterans at the Holyoke Soldiers Home have now contracted the coronavirus and at least 38 have died of the virus in the past three weeks.

Two more veterans who were confirmed to have suffered from COVID-19 have died in the past day and test results are pending for another resident who died overnight. Eight additional veterans have died in the same time period from other causes, said officials for the state Executive Office of Health and Human Services.

Family members confirmed that Charles Lowell, 78, a former Hardwick Selectman and volunteer firefighter and EMT in the town died Wednesday morning in the hospital. Lowell, who served five years in the U.S. Air Force and then worked at IBM for 27 years, had been fighting the virus for three weeks.

“He is an all-around good guy and he loves his town,” his daughter Susan Kenney said in an interview before his death.

Lowell also leaves his wife Alice Lowell, who he met when they were children and he was doing chores on her father’s farm, three other children and several grandchildren.

An additional 99 veterans have tested positive and are being treated at the Holyoke Soldiers’ Home or in area hospitals. Test results for three veterans are pending and 76 residents have tested negative. When the first resident tested positive on March 21 there were about 210 veterans living at the state-run home, state officials said.

After learning on March 29 that eight residents had died from the rapidly-spreading virus and many more were suspected to be infected, Health and Human Services Deputy Superintendent Daniel Tsai sent a team to examine the problems at the home the next day. On March 30 officials placed Superintendent Bennett Walsh on paid administrative leave and tapped Val Liptak, a registered nurse and CEO of Western Massachusetts Hospital in Westfield, to take over the administrative role.

Walsh has said any accusation of wrong-doing or mismanagement is “outrageous.” In a written statement released on Thursday Walsh said he kept state officials updated on the home’s situation as it daily grew more desperate and requested help from the National Guard but was denied. Local and state officials have said they were not aware of the extent to which the virus was spreading.

After the Board of Trustees for the home scheduled a meeting to presumably discuss firing Walsh. He filed a complaint in Hampden Superior Court to stop the hearing and received a temporary restraining order. A hearing on the issue is now scheduled for April 30.

A clinical control team made up of medical experts is continuing to work at the facility to ensure proper infectious control methods are being used to prevent the virus from spreading to the about 30 residents who tested negative and remain at the home, state officials said.

Of the residents who initially tested negative, 44 were moved to a satellite unit at Holyoke Medical Center where their health continues to be monitored. After the move, 15 have later tested positive and three have died, officials said.

A total of 79 employees have tested positive and many remain out of work. Staffing is being augmented by medical personnel working for the National Guard and the control team has contracted with a nurse supervisor and several other contract and per diem nurses to provide additional manpower.

The team is closely tracking the supply of protective equipment used by nurses, doctors and nursing assistants and received a delivery from the state Department of Public Health of 50,000 surgical masks and 1,000 gowns, state officials said.

All staff is required to wear masks and other protective equipment while working at the Soldiers’ Home.