The commander of the 1st Brigade Combat Team at Fort Bliss has been relieved of his duties after an investigation... 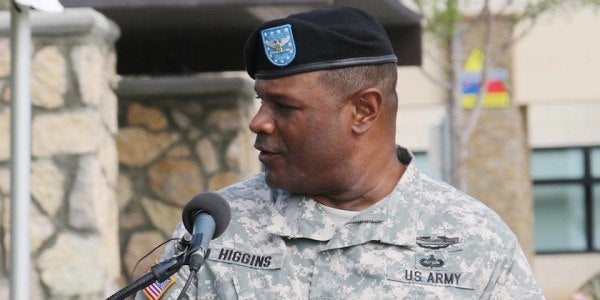 The commander of the 1st Brigade Combat Team at Fort Bliss has been relieved of his duties after an investigation allegedly found multiple violations of the Army’s sexual harassment and equal opportunity regulations, post officials confirmed Wednesday.

Col. Earl B. Higgins Jr. was relieved of command Tuesday following the investigation, which was initiated several weeks ago, according to a statement issued by Fort Bliss.

The investigation concluded that Higgins had committed “multiple violations of the Army’s sexual harassment and equal opportunity regulations and policies, created a hostile work environment and failed to treat subordinates with dignity and respect,” the statement read.

The alleged instances of sexual harassment cited in the investigation were verbal only, post officials added.

Based on the investigation done by an officer senior to Higgins, Maj. Gen. Robert “Pat” White, commanding general of Fort Bliss and the 1st Armored Division, relieved Higgins of his duties for “lack of trust and confidence in Higgins’ ability to command.”

The dismissal was not due to performance at the recent Iron Focus exercise, post officials said, and it will not impact the brigade’s upcoming rotation to the National Training Center at Fort Irwin, Calif., this fall.

Higgins led a brigade of about 4,000 soldiers. A brigade is the largest subordinate command under the 1st Armored Division, which has six brigades.

“Our soldiers deserve the best leadership the Army can provide,” White said in a statement. “Based on the findings of the investigation, and in the best interests of the soldiers of the Ready First Brigade, I made the decision to relieve Col. Higgins of duty.”

Lt. Col. Stephen Phillips, commander of the 1st Battalion, 36th Infantry Regiment, will serve as acting brigade commander until the Army appoints a replacement for Higgins.

Higgins is currently performing administrative duties under the supervision of the 1st Armored Division’s chief of staff.

Higgins, a native of Charleston, S.C., took command of the brigade in July 2015. He led it on a rotation to the Joint Readiness Training Center at Fort Polk, La., in January of this year and was preparing it for a return trip to NTC.

The brigade went to NTC at Fort Irwin in June 2015 before Higgins took command.

No other details on Higgins’ alleged misconduct were available.