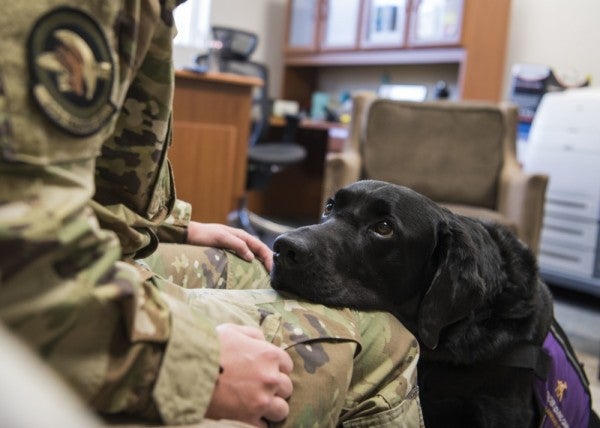 WASHINGTON, D.C. – The House of Representatives on Wednesday approved a bill authored by Columbus Republican Rep. Steve Stivers that would set up a U.S. Department of Veterans Affairs pilot program to teach veterans service dog training as a form of therapy.

The Puppies Assisting Wounded Servicemembers (PAWS) for Veterans Therapy Act authored by Stivers, an Ohio Army National Guard Brigadier General who served in Iraq, would partner with non-profit service dog training organizations to teach the skills to veterans affected by post-traumatic stress. Veterans who complete the program would be able to adopt their service dog if they want to continue with the therapy.

“Too many of the men and women who serve our country return home with unseen trauma,” Rep. Mikie Sherrill of New Jersey, a former Navy pilot. “Service dogs soothe the invisible wounds of war.”

Stivers said a soldier he commanded during Operation Iraqi Freedom told him that his service dog helped him fly on a plane for the first time in 10 years and to take his fiance to dinner.

“That is the impact this bill can have on the lives of our veterans,” said a statement from Stivers.

The bill's Senate counterpart is pending before the U.S. Senate Committee on Veterans' Affairs, and Stivers said he hopes it will be approved “in quick order.” He noted the bill passed the House two years ago but the Senate didn't act.

“We lose 20 veterans a day to suicide,” Stivers said on the House of Representatives floor. “Congress has to work to address that situation.”