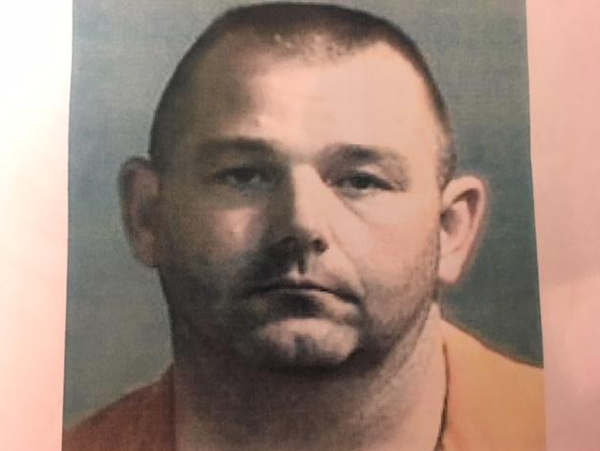 THETFORD, TWP., MI – Alleged misuse of a military surplus equipment program by a rural Genesee County police department has embroiled its chief and may now include other police officers.

Kenny, 45, now faces two felony charges after allegations that he scrapped some of the equipment and pocketed the money rather than give it to the township.

Here's a look at the people involved, what happened and what's on the horizon in Thetford Township's police department.

The chief contends he is innocent, that he used the money to pay for officer training and that the rest of the money was found in an envelope inside a storage container that held some of the items.

But township officials decided to put Kenny on unpaid leave until the matter is settled in court.

The Department of Defense turns over the property to local law enforcement agencies after it's determined the items might otherwise be destroyed because they were held as part of reserve stock and are no longer needed, according to the federal Defense Logistics Agency, which oversees the program.

More than 8,000 law enforcement agencies nationwide have enrolled in the program, according to the agency. Items distributed to local departments range from clothes and office supplies to vehicles, rifles and small arms.

Thetford Township police Chief Robert Kenny previously said he has participated in the program since 2008 and has never had a problem before.

The township, in rural northern Genesee County, has a population of 7,049 residents, according to 2016 Census figures.

Kenny previously said the township has items like generators, pants, cold weather gear, a couple of Humvees, sleeping bags, rifles and other items.

Sometimes items that are requested through the program turn out to be something Kenny said his department didn't need.

Records obtained by MLive in 2015 from the U.S. Defense Logistics Agency show the Thetford Township Police Department has obtained 450 items through the program at a value of more than $1.1 million dollars.

Some of the items include four mine detecting sets, two rugged terrain forklifts and two trailer-mounted hydroseeders.

Anything that is provided through LESO that cannot be used must be returned by whichever agency asks for it.

Kenny previously said it's likely half of the inventory his department received through the program could be returned. The closest spot to return unusable equipment is in Columbus, Ohio, according to the chief.

If there's one thing many people agree on, it's where the conflict began.

Thetford Township Trustee Stan Piechnik and Township Supervisor Gary Stevens requested a list of what equipment Kenny had and where it was stored.

The pair alleged Kenny stored the equipment outside the township and it was being used by the chief's friends and not the township.

“He won't reveal where he took it,” Piechnik told MLive-The Flint Journal in 2017. “We had an audit. They came to the conclusion they're supposed to have a list. They wanted that completed and the assets put on the inventory list and that hasn't been done. It's an opportunity to take a good thing and go bad.”

Some people supported the chief and allowed him to store equipment on their property.

Eugene Lehr said he began getting harassed by the township after holding onto the items at his Thetford Township property for nearly a decade.

“We let them park it for free at my property,” Lehr, said in April with several other residents flanking him outside the township hall, including two men that also stored items at their residences. “The three of us just got pissed off and we brought it back.”

Mike Walther, a Montrose Township resident who grew up in Thetford Township, was also keeping items on his property and felt slandered after recent media reports.

“I didn't want to deal with it anymore. The last thing that came out in the paper, they had a list of so-called things that I supposedly had at my house,” Walther previously said. “They had a list of stuff that I owned for years that I bought myself that was supposedly military equipment. I said, 'You know what, I'm done with it.' I'm not doing nothing for free and get treated this way.”

Former Clerk Leanne Pennington allegedly smashed her computer's hard drive after she was questioned by investigators looking into the possible misuse of a military surplus program.

Police say in a search warrant affidavit filed July 9 by Genesee Sheriff Lt. William Lanning in Genesee District Court that Pennington was interviewed in connection with an investigation into Kenny

In the warrant, Lanning claims Pennington “took the hard drive out of her assigned computer and smashed it” after he interviewed her.

Lanning said he is in possession of the hard drive, but it is “beyond retrievable,” according to the warrant.

No charges have been filed against Pennington, who resigned from her position with the township the day after Kenny's arraignment.

Her attorney, Edward Farrell, said Pennington did nothing wrong and that she destroyed the hard drive because she received a new computer and the old equipment had sensitive township information on it.

Pennington was interviewed by detectives three times about Kenny and the surplus equipment but declined to talk a fourth time, according to Farrell.

Pickell said investigators discovered Kenny kept thousands of dollars earned from scrapping items for personal use rather than turn it over to Thetford Township officials.

Kenny then concocted a story to cover up his alleged misdoings, Pickell previously said.

Pickell outlined Kenny's actions during a news conference in August, while announcing what led to felony charges of embezzlement and obstruction against the chief.

Kenny allegedly received almost 4,000 items that had a retail value of more than $2.7 million since 2012, including parachutes, mine-detecting devices, excavators, hydroseeders and other equipment.

Additional search warrants executed by Pickell's office last week raised the issued that other current and former law enforcement personnel may be involved in the case.

Kenny's attorney Frank J. Manley told MLive-The Flint Journal that four or five searches were conducted by investigators, one at Kenny's home and some at the residences of current and former law enforcement officers.

Manley said the items sought in the search warrants involve property from a non-profit agency and the Thetford Township Police Department.

Pickell confirmed that there were additional search warrants executed, but declined to say whether the searches were in connection with the chief's case.

The Law Enforcement Support Office gets property from the Department of Defense that is no longer needed for military operations.

The LESO program then turns the property over to local law enforcement after it is determined the items might be destroyed because they were held as part of reserve stock and are no longer needed, according to the federal Defense Logistics Agency, which oversees the program.

More than 8,000 law enforcement agencies nationwide have enrolled in the program according to the agency. Items distributed to local departments range from clothes and office supplies to vehicles, rifles and small arms.

Records obtained by MLive in 2015 from the U.S. Defense Logistics Agency show the Thetford Township Police Department has obtained 450 items through the program at a value of more than $1.1 million dollars.

Some of the items include four mine detecting sets, two rugged terrain forklifts and two trailer-mounted hydroseeders.

Anything that is provided through LESO that cannot be used must be returned by whichever agency asks for it.

Stevens, the township supervisor, said auditors for the township asked to figure out exactly what items were obtained through the LESO program and where they were at.

Before charges were filed, Stevens said he tried to have the equipment returned to the township.

“I've requested that he start bringing things back and he's neglected to do that,” Stevens said of Kenny in 2017. “I don't see the benefit for the residents. He has a job to work for the residents. He just basically goes and does his own thing with the military equipment. All the police work isn't being done.”

Some of the gear includes 1,000 “kitchen items” that have already been consumed, mine-detecting sets, rugged-terrain forklifts, hydroseeders and musical instruments.

More than 20 items are stored at Lehr's property.

He showed MLive-The Flint Journal two of the generators received by Thetford police. They were stored in his barn under a large tarp.

One had a personal watercraft sitting on top of it.

Neither of the diesel generators appear to be in working order.

“They're not going to give good stuff away – they'll sell it,” Lehr said, adding that the value of the items stored on his property is between $600 to $800. “I own all my own stuff. There ain't a damn thing I got from the military.”

“This is misuse and abuse of a program that was set up to help law enforcement and a community of people,” Pickell said during a news conference in August.

Pickell alleges Kenny took several heavy-duty metal storage containers obtained through the program to a Vienna Township scrapyard in 2012 and 2013.

Kenny allegedly received more than $5,000 in three different checks and deposited the money in his own account or took it in cash, Pickell previously said.

“Those three checks should have been placed in the Thetford Township banking account, not in Chief Kenny's personal account,” Pickell said.

Kenny then gathered other Thetford Township officers and a journalist to go search a storage container at Dodge and Saginaw roads.

While moving the items, Kenny found an envelope containing cash with “LESO” written on it inside a container holding sleeping bags, Pickell said.

“Chief Kenny assembled what I believe to be unsuspecting witnesses to vindicate himself,” Pickell said.

There was almost $4,800 in cash in the envelope that Kenny found, according to Pickell.

Kenny was arrested in August, when his personal vehicle was stopped by Genesee County officers.

The day after Kenny was charged, Thetford Township officials put the chief on unpaid administrative leave during a special meeting.

“I have no compassion for him for this,” Piechnik said during the meeting while voting to put Kenny on administrative leave without pay. “At this point, I feel it would be inappropriate to pay him.”

The measure passed 4-2 and went against the recommendation of the township's attorney, Michael Gildner, who recommended Kenny be put on paid administrative leave.

Shelly Ayotte and John Congdon voted against the measure because they said Kenny was innocent until proven guilty.

Clio resident Dick Taylor said he came to the meeting in support of Kenny and because he's known him for years.

“I think it's a shame. They tried him right here,” Taylor said. “I don't think he's done anything wrong.”

What happened to the clerk?

Clerk Leanne Pennington was absent from the special meeting that saw Kenny put on unpaid leave.

The move tied up township business, he said.

“Basically, we're going to be stalled,” Stevens said. “She signs half the checks. We're just going to have to put them on hold, I guess.”

Multiple search warrants were executed at Kenny's home and other locations last week.

The chief's attorney said the searches were related to the investigation, however, Pickell would not confirm that.

“These gentlemen have dedicated their lives to public service and protecting the community,” Manley said. “We're confident that anything they're involved with is above board and within the law.”

Kenny's preliminary exam in Genesee District Court was delayed earlier this month when his attorney told the court he didn't have all of the information that the prosecution had.

“As we're going through discovery, we've found we're missing things,” said Kenny's attorney Frank J. Manley during a court hearing Jan. 15. “We're asking for the court to continue to allow us to look through the materials. These are things that we think we're entitled to, that we think are necessary to defend Chief Kenny. My client's life is at stake.”

SEE ALSO: That Time The Russian Military Stole A Bunch Of US Marine Corps Humvees