"It’s definitely a very cool feeling to be part of something this new and something that you’re really going to have a big influence on." 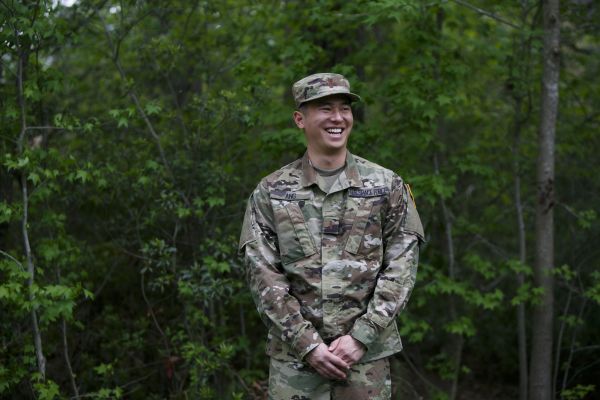 When President Donald Trump first publicly spoke about a new military branch called the Space Force a couple years ago, Bradlee Ang and his fellow cadets at the U.S. Air Force Academy weren’t sure what to think.

“All of our reactions were, ‘oh, that doesn’t sound real,’ ” said Ang, of Chesapeake. “And I don’t think that’s happening anytime soon.”

But then things started happening. Fast.

Gen. John Raymond, chief of space operations for the new force, visited their Colorado campus and assured the cadets it was very real. Academy graduates could be commissioned into the force, Ang learned.

So Ang got on board. And now, after graduating early amid the coronavirus pandemic, he’s just the sixth person to join the U.S. Space Force.

“It feels awesome,” said Ang, 22, who’s a second lieutenant. “It’s definitely a very cool, for lack of a better term, feeling to be part of something this new and something that you’re really going to have a big influence on because you are trailblazing.”

The Space Force was officially established in December within the Department of the Air Force, according to its website.

The service “organizes, trains, and equips space forces in order to protect U.S. and allied interests in space and to provide space capabilities to the joint force,” the website reads. Responsibilities will include “developing military space professionals, acquiring military space systems, maturing the military doctrine for space power, and organizing space forces to present to our Combatant Commands.”

Ang said he’ll be working as an acquisition manager. He’s committed to the new force for at least five years.

“The military was always kind of around me,”

Ang graduated in 2016 from Oscar Smith High School. He was part of Junior ROTC all four years, which he credits with preparing him for the academy.

Growing up in a military family in a military area, he’d long known he wanted to pursue a career in the armed forces. His father, Lee Ang, served in the Navy for two decades and retired as a lieutenant commander.

“The military was always kind of around me,” he said.

At the Air Force Academy, Ang majored in management. He learned quickly that he’d have to keep his career on the ground, because he gets airsick.

When the Space Force opportunity came up, he applied and was accepted along with 85 other cadets out of a graduating class of more than 900.

Ang’s senior year started taking a turn a few months ago due to the COVID-19 crisis. The academy sent home cadets from the three lower classes, but kept seniors on campus.

To protect them from the virus, the cadets spent most of their time in isolation. Two took their own lives.

Instead of waiting for the original graduation date in late May, it was pushed up to April 18.

Lee Ang still got to give his son a virtual salute at Bradlee’s commissioning ceremony a day earlier, though. Dressed in his old Navy uniform, he tuned in through a live YouTube video feed.

The father said he couldn’t believe his son is one of the first officers in a new military branch.

“You will build this service from the ground up,” he told the cadets. “You will lay the foundation of service that is innovative and can go fast in order to stay ahead of a significant and growing threat. And you, if deterrence fails, will fight and win the battle for space superiority.”

Ang returned home to Chesapeake last week following graduation. He already has his uniform, which for now features a traditional operational camouflage pattern of green and brown.

He heads to Vandenberg Air Force Base in southern California in late June for training.

“I’m more excited than anything to finally start.”