How Mattis’s Resignation Perfectly Captures The Moral Dimension Of Leadership

The recent resignation of Defense Secretary James Mattis reminds us that serving the nation at the strategic level is not an amoral activity, nor a place where realism pushes ethics off the stage or where Machiavelli is more useful than Aristotle 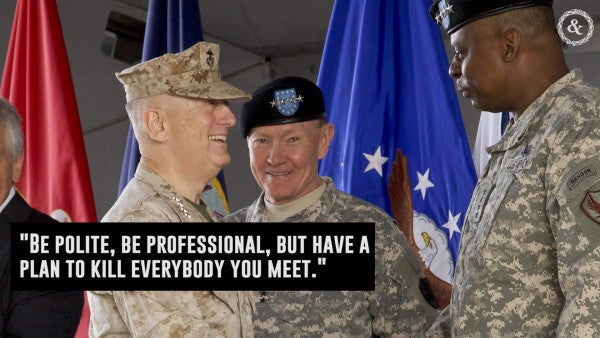 The recent resignation of Defense Secretary James Mattis reminds us that serving the nation at the strategic level is not an amoral activity, nor a place where realism pushes ethics off the stage or where Machiavelli is more useful than Aristotle. A lot has been written on the meaning of Secretary Mattis's resignation pointing out, correctly, that his was a principled resignation. But few say exactly what those principles are.

For me, a close reading of his resignation letter and understanding his reasoning can reveal how closely related are the strategic and the moral.

Mattis' letter clearly articulates the strategic principle that the president has a right to a defense secretary whose views are aligned. Mattis made clear that his and the president's views are too far out of synch in five major areas: that U.S. national security requires a comprehensive system of alliances and partnerships; that the U.S. must respect our allies and partners; that to secure the nation's interests and prosperity, the U.S. needs a certain kind of international order; that U.S. leadership is necessary to create and sustain that order; and that the U.S. must be clear-eyed about countries whose strategic interests are increasingly in tension with ours. Equally important, Mattis' letter also draws upon a sophisticated understanding of the moral dimension of service at the national strategic level.

The president, as commander-in-chief, is the final decision authority for matters of national security. But having that authority and using it well are two separate matters. A democracy expects its chief executive to use his final decision authority responsibly, for often at stake—especially in matters of using force—are the interests of the political community as well as the lives of those used in execution, not to mention the lives of the innocent who always get caught up in the execution of missions. In our system, responsibility for national security is shared.

Responsible use of final decision authority requires a process that increases the probability that any particular decision reached by the final decision authority ensures the security of the nation and decreases the risks involved. The integrity of such a process as well as the fidelity of the information used to inform any individual decision is a responsibility shared by civilian leaders, executive and legislative, as well as military leaders.In our democracy the integrity of the decision making and execution processes as well as the fidelity of the information used is ensured by input from both subordinates to the President and the co-equal legislature together. There are no “process police.” The rest of us citizens-at-large trust those involved in the decision and execution process to maintain its integrity and fidelity. Mattis's resignation is telling us that these processes are at risk.

A defense secretary has at least four, sometimes conflicting, loyalties. One to the president, two to the nation, and one to those who serve in the Department of Defense. The secretary must give the president candid advice prior to the final decision, then faithfully execute the decision and adapt as the situation unfolds. On behalf of the nation, the secretary must be the vital link ensuring the integrity and fidelity of the decision making and execution process, and he must manage the Pentagon efficiently and effectively. Finally, the secretary must ensure that the lives of those military and non-military citizens who serve in the Pentagon, are not used in vain or risked unnecessarily. Because of these mixed loyalties, obedience cannot be absolute.

What is true of the defense secretary is also true of the rest of those civil and military leaders involved at the national strategic level. When one of these principals believes—after proper analysis and discernment—that decisions made are contrary to the nation's interests or that the process or information used to make decisions decreases the probability of the nation's security and increases the probability of unnecessary risk or using lives in vain, that principal has three choices: (a) obey the legally made—though perhaps imprudent—decision, (b) persuade the president that the decision in question or how it will be executed should change, or (c) leave.

Persuading is always the preferred choice, for the dialogue among those at the very top of America's national security system, however uncomfortable and heated it may become, helps improve the likelihood that any particular decision is the best—all things considered. Dialogue among competing perspectives is the grist of proper democratic decision-making when the life of the political community, the lives of those who carry out such decisions, and the lives of the innocent are all at stake. Decisions so closely tied to using and risking life of course have an essential moral dimension.

Leaving should be a last resort, used only when all attempts of persuasion fail. But leaving is sometimes the only option to preserve one's integrity or identify a serious strategic problem. Mattis did not resign simply because his advice was not followed. No president is obligated to follow a subordinate's advice. Nor did Mattis resign only because his views were not sufficiently aligned with the president's. Rather, Mattis's letter reflects that, in his studied and considered opinion, persuasion no longer worked and obedience to decisions that decreased U.S. national security and increased risk—however legal those decisions may be—was untenable. Under these conditions, leaving was his only option.

The choice of leaving illustrates that even at the highest national and strategic level a person remains responsible for his or her own conscience. Accepting a position of significant responsibility at the national level—like that of cabinet secretary, national security advisor, chairman of the Joint Chiefs, geographic combatant commander, or an ambassador—does not entail the surrender of one's conscience. Rather it demands more of one's moral senses, for each is participating in and executing decisions that involve the communal and private lives of others. Military principals have yet another level of complexity and difficulty, for they must also consider the risk to civil control of the military in their “obey, persuade, or leave” calculus. Certainly the phrase, “to whom much is given, much is expected” applies to those at the highest levels of American's national, strategic system.

Mattis' letter is a principled resignation, and the principles involved are both strategic and moral. In fact, his resignation shows how, at his level, the strategic and the moral are inextricably linked. America is well served by leaders like Secretary Jim Mattis. Some may not agree with his decision, and others may disagree with my analysis of it. But all should see his example for what it is: a profile in courage.

James Dubik, a retired Army general, is senior fellow at the Institute for the Study of War and author of Just War Reconsidered: Strategy, Ethics, and Theory.