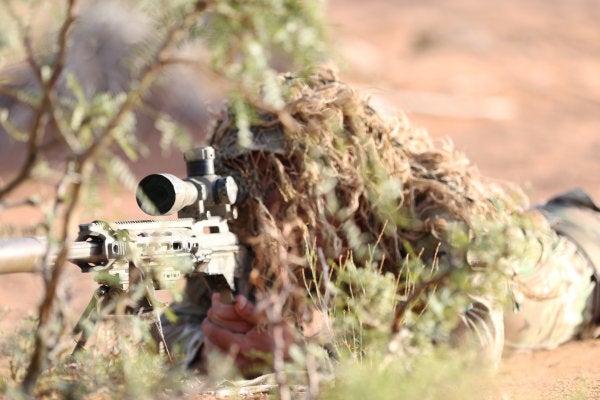 Snipers are masters of disguise who are able to hide in plain sight, providing overwatch, scouting enemy positions, and, when necessary, taking out threats.

“No one knows you're there. I'm here. I'm watching you, I see everything that you are doing, and someone is about to come mess up your day,” First Sgt. Kevin Sipes, a Texas native and experienced US Army sniper, said during a recent interview.

“We are capable of hurting you in many ways … We're not going to tell you how we're coming. But, we're coming for you.”

Business Insider asked a handful of trained Army snipers, elite sharpshooters who have served across multiple combat deployments in multiple countries, how they disappear in any and all environments. Here's what they had to say.

Concealment is about putting anything you can between yourself and the watchful eyes of the enemy.

“A sniper is not limited to any one method,” Sipes, a veteran sniper with more than a decade of service, explained. “We are extremely free. You are limited only by however you limit yourself.”

Snipers use a mixture of natural and artificial materials to achieve concealment and camouflage to avoid enemy detection, as the sniper must remain unseen by the enemy to collect intelligence or take a shot if needed. The aim is to effectively blend into the negative space, areas the eye naturally overlooks.

Concealing oneself from an adversary's gaze is about putting “anything you can between you and whatever might be observing you,” Staff Sgt. David Smith, a sniper instructor at Fort Benning, told BI, explaining that this could be natural vegetation, face paints, false screens, a sniper's ghillie suits, or the hides they construct.

A ghillie suit is designed with loose strips designed to resemble natural backgrounds like twigs or long grasses, and can make snipers nearly undetectable by visual. Ghillie suits typically do not shield the wearer from detection via thermal imaging, a technology that advanced militaries are likely to use; however, the Army is developing an improved ghillie suit which is expected to offer enhanced protection.

With the tools they bring with them and materials found in the field, snipers can break up and distort their outline, making them significantly harder to spot.

In many ways, it's about knowing your environment.

“The best tool snipers can use to disguise and conceal themselves from the enemy is a solid understanding of their surroundings,” Capt. Greg Elgort, the company commander, told BI.

Snipers need to know the lay of the land, they need to plan their route, and they need to take advantage of whatever nature gives.

“I want to look at the terrain. What can I put between myself and the target,” Sipes, who runs the marksmanship training company alongside Elgort, said.” It's not just about the face paint or what I attach to my body, it's the natural environment around me that I can utilize to keep them from seeing me.”

For example, the winners of the International Sniper Competition, two non-commissioned officers from the Army's 3rd Ranger Battalion, 75th Ranger Regiment, hid themselves from view with nothing more than a ghillie suit hood and various materials they found in the field.

In particular, they focused on hiding their face.