“With COVID-19, it’s like we have 54 different hurricanes hitting every state, every territory, and the District of Columbia.” 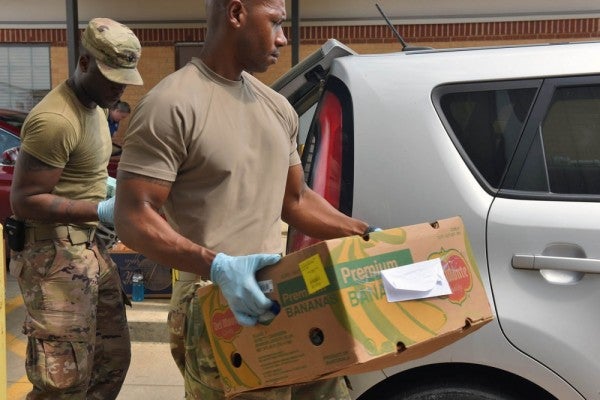 The arrival of the U.S. National Guard members in their camouflage uniforms and rumbling green trucks is a sign that government is ramping up its response in times of crisis.

Hurricanes, floods, tornadoes, riots and now a global pandemic. The battle against COVID-19 is the Guard’s latest mission.

By Tuesday, more than 9,000 members were helping with the effort, according to information provided by the Guard, a number that has been increasing each day.

At a news conference last week, Lengyel said he expects “tens of thousands” of Guard members to assist in the fight against the disease. On Sunday, President Donald Trump announced that he had activated the Guard to assist New York, California and Washington, three of the states hit hardest by the novel coronavirus.

A reserve component of the U.S. Armed Forces, the Army National Guard and Air National Guard operates in all 50 states and the District of Columbia, Puerto Rico, Guam and the Virgin Islands. Governors serve as the commander-in-chief of the Guards in their states, though the U.S. president can activate state guards to assist the military. Many of the Guard’s roughly 450,000 members have full-time civilian jobs while serving part-time alongside full-time personnel.

Often called to help with natural disasters, one of the Guard’s most well-known mobilizations came in August 2005, after Hurricane Katrina battered the Gulf coast. The aftermath of the storm triggered a rescue effort involving more than 50,000 Guard members from across the country, according to the U.S. Army.

The Guard has also responded to quell civil unrest, as it did in Ferguson, Mo., after 18-year-old Michael Brown was shot by a police officer, and in Baltimore the following year after 25-year-old Freddie Gray died from injuries sustained in police custody.

A different kind of challenge

The coronavirus pandemic is a different kind of challenge, prompting a wide-ranging response with a variety of assignments.

Other assignments have had members manning call centers, cleaning and disinfecting common spaces and providing transportation for medical providers.

Members are also helping at sites popping up across the country to screen the public for the virus. This has been a primary focus for the Florida National Guard.

As of Tuesday, more than 1,100 Florida Guard members had been activated to support coronavirus response mission, according to 1st Lt. Tahisha Coleman, a public affairs officer for the Guard. They include Army combat medic specialists, Air Force medical technicians and other personnel working with state health and emergency management staff at community-based testing sites in Orange, Broward and Miami-Dade counties.

Last week, Florida guard members descended on C. B. Smith Park in Cape Coral to set up and man South Florida’s first COVID-19 drive-through test site. Photos released by the Guard show members discussing the logistics of the site, setting up metal barricades and walking up to car windows with a swab in hand to collect samples from patients in waiting cars.

Guard members also are assisting with test sites at the Hard Rock Stadium in Miami Gardens, which opened Monday, and at the Orange County Convention Center in Orlando. Another is planned for Marlins Stadium in Miami.

The Guard’s role is expected to expand in the coming days and weeks.

At a news conference Sunday at the Hard Rock Stadium site, Florida Gov. Ron DeSantis said Guard members would assist with setting up field hospitals to treat patients if that becomes necessary. That’s already happening in New York, where Guard members there were helping to convert the Javits Convention Center in Manhattan into a 2,000-bed field hospital.

Trump said Sunday that the federal government will cover the cost to deploy guard units in California, New York and Washington to carry out “approved missions to stop the virus while those governors remain in command.”

Guard leaders and Trump himself have tried to quash rumors that the Guard was gearing up for a nationwide quarantine and a declaration of martial law.

“I hear unfounded rumors about #NationalGuard troops supporting a nationwide quarantine,” Lengyel, the National Guard Bureau chief, tweeted on Friday. “Let me be clear: There has been no such discussion.”

During the news conference a day prior, however, Lengyel didn’t rule out that Guard members could be used to help enforce curfews, saying governors have the authority to assign their state’s Guard members to such a task.

“Anything that the law enforcement capacity normally does, they could be augmented with National Guard,” he said.