As the ground rattled and earth erupted with a spray of damp sand, Hubert Edwards watched with a familiar gleam... 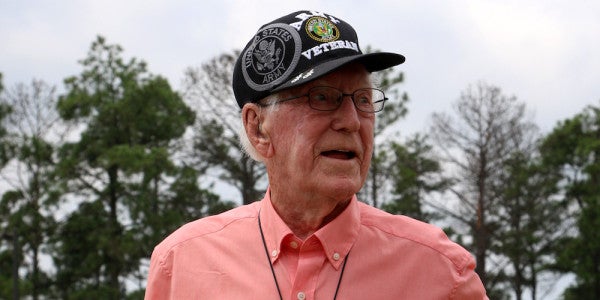 As the ground rattled and earth erupted with a spray of damp sand, Hubert Edwards watched with a familiar gleam in his eye and the slightest hint of a smile.

This is where artillerymen thrive. And, even at 100 years old, Edwards is an artilleryman.

He calmly watched the flurry of activity around him and wasn’t fazed by the blasts echoing across Fort Bragg – possibly out of familiarity but more likely because he had taken out his hearing aid.

A little over a year ago, the soldiers of 2nd Battalion, 319th Airborne Field Artillery Regiment were in Iraq with the 2nd Brigade Combat Team, 82nd Airborne Division. There, they helped liberate Mosul and drove the Islamic State out of territory it had held for years.

Tuesday’s firing missions were training. And as the soldiers fired, they kept stealing glances at Edwards and his ever-growing smile.

“It brings out a lot of memories,” the veteran said. “It’s pretty exciting.”

Edwards was a special guest of Fort Bragg and the 82nd Airborne Division on Tuesday, just days after he celebrated his centennial.

The World War II veteran, who served at Fort Bragg before the war and fought his way across North Africa and Europe with the 17th Field Artillery Battalion, was greeted by post leaders before spending part of the day with paratroopers in the field.

“What a unique opportunity for you to be here,” he said. “Thank you for that.”

But Edwards insisted the pleasure was all his.

“You people know how to make somebody welcome,” he said. “It’s my honor.”

During the visit, Edwards shared stories from the 37 months he spent fighting in World War II. That included 660 days fighting on the front lines, spread across four major invasions that included North Africa, Sicily, Italy and France.

“I’ve had a lot of experiences,” Edwards said. And many have been difficult.

He said of all the men who deployed to Europe with this unit, only 30 percent came home alive.

During the war, Edwards was part of the crew for a 155 mm howitzer. His unit fought at Kasserine Pass during the North African campaign. But it was a different battle, at El Guettar, that stands out most for the aging veteran.

With soldiers gathered around him, he recalled waking on a quite morning, the guns of three artillery batteries placed behind sand dunes.

“Everything was quiet,” he said. “It was peaceful.”

But Edwards’ battery commander had an uneasy feeling. He climbed to the top of the dune and looked to the distance through a pair of binoculars. Eventually, he counted 36 German tanks approaching and ready to attack.

Edwards said the Germans attacked six times by late afternoon. And each time, the Americans’ 12 howitzers would knock them back.

With the tanks destroyed, Edwards said, the Germans began to charge ahead on foot, and the Americans switched to anti-personnel rounds.

The ensuing blasts were “beautiful artillery,” but also a gore-filled sight of flying body parts.

By the end of the battle, Edwards said, the soldiers had eight rounds of ammunition left. And they had fired their guns so many times that parts of them had melted from the heat.

“I wonder what (the Germans) would have done had they known that?” he said.

The howitzers he saw on display at Fort Bragg on Tuesday were “a little different” from those older variants, Edwards said.

Edwards visited with gun crews and soldiers at an observation point. At the latter, he watched rounds hit their target from miles away.

Afterward, soldiers invited him to return next year to celebrate another birthday. Edwards said he’d be up for it.

“I’ve got another 10 years,” he said. “I want to be the oldest living World War II veteran.”