Having completed their missions, some troops deployed to the U.S.-Mexico border are heading back to their home bases, U.S. Northern... 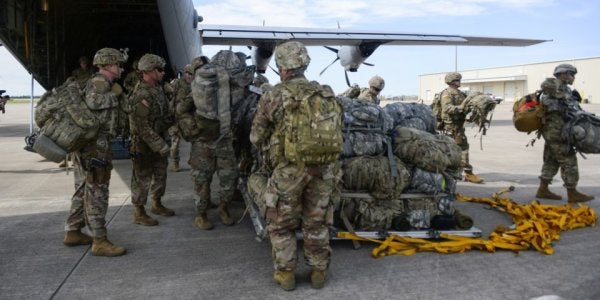 Having completed their missions, some troops deployed to the U.S.-Mexico border are heading back to their home bases, U.S. Northern Command reported Thursday.

The number of troops at the border, which peaked at 5,900 troops from across the Army, Navy, Marine Corps, and Air Force, has been decreasing. Around 750 service members serving in Texas and Arizona redeployed to their home bases to prepare for other missions on Wednesday. The Department of Defense currently has roughly 4,200 active-duty troops at the southern border.

By state, there are 1,700 active-duty troops in Texas, 1,000 in Arizona, and 1,500 in California. There are also approximately 2,100 National Guard units deployed to the U.S.-Mexico border. For the active-duty troops, the mission, originally known as Operation Faithful Patriot but later renamed “border support,” was expected to end on December 15, but the Department of Defense agreed to extend the mission to the end of January following a Department of Homeland Security Request.

The troops that have left the southern border are certain engineering, logistics, and headquarters units, some of which were involved in hardening points of entry and erecting barriers. Since late October, troops have set up 70 miles of wire obstacles and moveable barriers at 22 ports of entry.

Among the remaining troops are military police units, which have completed 10,000 man-hours of unit training — including tactical and riot control training — in recent weeks, while military rotary wing aviators flew more than 740 hours in support of the border mission. These units will continue their service in border areas.

Several thousand troops were sent to the border toward the end of October to support Customs and Border Protection as large caravans consisting of thousands of Central American migrants marched northward. While the mission initially focused on barrier emplacement, a force protection element has also been incorporated for the active-duty military personnel deployed to the border.

While there was a clash between migrants and CBP personnel at the San Ysidro port of entry last month, there have not been any serious escalations since. Some of the migrants have actually started heading home.

President Donald Trump stated Tuesday that the military could be directed to build a wall on the U.S.-Mexico border, but the Pentagon explained the same day that there is no plan at this time for service members to do so.

Many of the president's critics have accused Trump of using the military for a political stunt. These accusations have been rejected by the Department of Defense and the administration.