Hundreds Of Recruits Get Sick At Marine Boot Camp

More than 300 recruits at the Marines’ boot camp in San Diego are suffering from diarrheal symptoms from an bacterial... 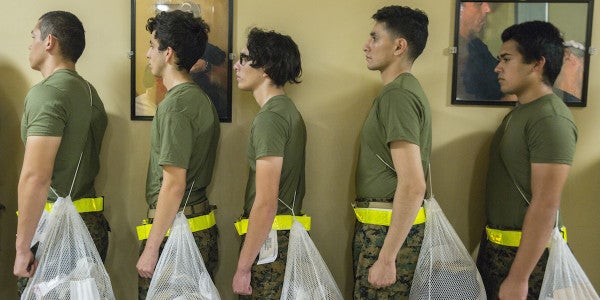 More than 300 recruits at the Marines’ boot camp in San Diego are suffering from diarrheal symptoms from an bacterial outbreak, officials disclosed on Tuesday.

With most of the cases linked to Shiga toxin-causing E.coli bacteria, physicians are treating 302 patients out of the more than 5,500 candidates undergoing training at Marine Corps Recruit Depot.

“Our immediate focus is identifying, isolating and treating recruits who present symptoms,” said Brig. Gen. William Jurney, the commander of both the depot and the Corps’ Western Recruiting Region, in a written statement. “We are working to identify the cause of the sickness, making sure our affected recruits can return to training as soon as possible and continuing training for recruits not influenced.”

The illness was identified in recruits at both the depot and at Edson Range at Camp Pendleton. The number of cases spiked on Monday, officials said, and 10 recruits were transported to an undisclosed hospital off the base for additional care. While Marines are still trying to identify the source of the contagion, commanders have quarantined sick recruits from those who have yet to display symptoms, mandated increased hand washing and ensured proper sanitation in all training areas.

Family members will be notified if the illness delays a recruit’s graduation date, officials added.