"What we would like for you to think about is this man is no longer unclaimed — he is ours." 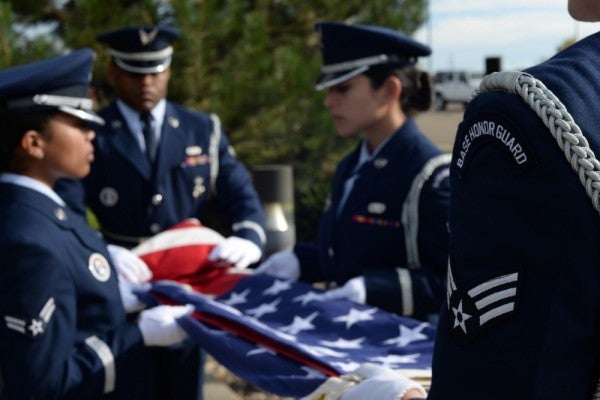 Wendy Gross waited outside the Symonds-Madison Funeral Home in downtown Elgin Wednesday to pay her respects to a man she did not know. In fact, most of the 400 to 500 people who gathered for the funeral service did not know John James Murphy.

“For me, it was a no-brainer. No one should have to die alone,” said Gross, of West Dundee. Murphy, 71, lived in Elgin and was a U.S. Air Force veteran. When his body went unclaimed by family or loved ones, the funeral home owners decided they would hold a service fitting of a military vet regardless.

“Many of you have come for a funeral for an unclaimed veteran,” the Rev. Tim Perry told those gathered. “What we would like for you to think about is this man is no longer unclaimed — he is ours.”

Murphy died Jan. 15 at Presence St. Joseph Hospital in Elgin. According to his obituary, he lived at Elgin's River View Rehab Center, where he was president of the center's resident council committee.

“Friends at the rehab center will remember him as a very friendly and cordial man who enjoyed helping others. He had a wonderful sense of humor and was always making jokes,” his obituary read. “He enjoyed spending his free time reading, listening to music, going outside, keeping up with the news, watching TV and movies.”

The Chicago native had worked as a Dominick's grocery store manager and as a welder.

The obituary said it's believed Murphy had a brother, two sisters, one child and grandchildren, but no one had claimed him as of Wednesday.

Daniel Symonds, an Army veteran who owns the funeral home with his wife, Joy, said they'd held services for other unclaimed vets in the past but never made it publicly known. This time they decided to post it on social media pages in the hope that people might come out to honor him and possibly contact relatives who may not have heard of Murphy's death.

The response was “overwhelming,” Symonds said. He received more calls Tuesday than on any other day in the funeral home's history, with some coming from other states, he said.

The Symonds said they are not taking any donations because they applied to receive $3,200 in government assistance to pay for the service, which included bagpipes, a funeral car processional and the playing of taps.

Whether they'd received funding or not, Daniel Symonds said they knew “this needed to be done.” And sometimes there can be a happy ending of sorts, such as when a daughter contacted them after a similar funeral for another unclaimed veteran, he said.

“Even though she was estranged from her father, she appreciated the gesture,” Symonds said. “She got his flag from us, and that meant something to her.”

lgin resident Doris Parker, a School District U-46 bus driver, was among those who attended the service. She waved a flag outside the funeral home as the motorcade passed by to take Murphy's body to the Abraham Lincoln National Cemetery in Elwood.

“I love you John James Murphy, my brother,” she shouted as the motorcade departed.

Elgin police officers and firefighters led the funeral procession out of Elgin and the Kane County sheriff's office took over on Interstate 90.

Steven Holt, a commander for AmVets Post 103 in Aurora, stopped briefly at Murphy's service before heading to East Aurora High School, his alma mater, where a service for U.S. Army Spc. Miguel Villalon was being held in the afternoon. Villalon, of Aurora, was killed in Afghanistan on Jan. 11.

“I will do what I can to recognize a veteran,” said Holt, of Aurora, a noncombat Army veteran of the Vietnam War.