Life as a submariner is inherently secretive. That's good for sneaking up on enemies, but it doesn't do the silent... 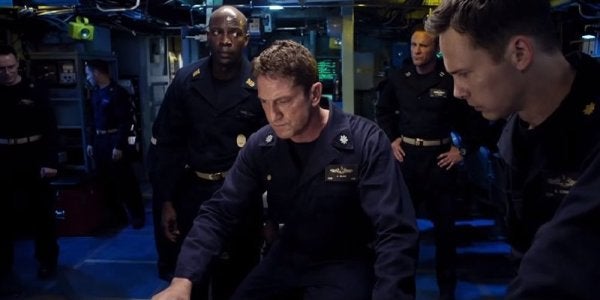 Life as a submariner is inherently secretive.

That's good for sneaking up on enemies, but it doesn't do the silent service any favors when it comes to helping Americans understand what submarines like those based in Norfolk are capable of, or what their crews do during deployments.

The action film Hunter Killer starring Gerard Butler that hits theaters Friday could help change that. In the process, it could also do for submariners what the blockbuster film Top Gun did for pilots by providing a window into what the high-stakes world of undersea warfare looks like in the modern era.

The movie was filmed in cooperation with the Navy and is largely set aboard a Virginia-class submarine, just like those based in Norfolk and built at Newport News Shipbuilding. Virginia-class submarines are the Navy's newest attack subs and were specially designed to operate in shallow water and deliver Navy SEALs, among other things.

“The movie is very intense and is very realistic,” said Cmdr. Sarah Self-Kyler, spokeswoman for Norfolk-based Submarine Forces Atlantic, who has seen the film. “It really put in perspective what submarines train to do everyday.”

While SEALs like those based in Virginia Beach have become popular culture icons ever since Osama bin Laden was killed, in “Hunter Killer” they play a supporting role. The submarine force is the star in a movie dealing with a hunt for a distressed U.S. sub, the discovery of a secret Russian coup and the need to save the kidnapped Russian president and sneak through enemy waters to avoid a potential World War III.

“In this dynamic economy, it's more important than ever that we find ways to inspire the next generation of warfighters to consider serving our country in the Navy,” Vice Adm. Fritz Roegge, former commander of the U.S. Submarine Force in the Pacific and current president of the National Defense University, said during a news conference about the film at the Pentagon last week.

Roegge hosted Butler aboard the submarine USS Houston while it operated out of Pearl Harbor, Hawaii, so he could gain an appreciation of everything submariners experience while they went through a variety of training drills.

“You can do it in a movie, but when you are actually on a sub, you realize the dangers that are there,” Butler said at the Pentagon. You are a thousand feet underwater and you go, 'OK. What are the different ways things can go wrong?' You have a greater appreciation of what these people do every day unsung and unseen and their courage and valor.”

Unlike other communities in the Navy, no sailor can be assigned to a submarine against his or her will. Every person serving aboard a sub chose to be there, and the crews are known for being close-knit.

Local submariners who got an advanced screening of the film at Naval Air Station Oceana's theater this past weekend said Hunter Killer did a good job capturing what a submariner's day-to-day missions can entail that they can't tell their loved ones about.

“To have a full Hollywood picture that kind of showcases the capabilities of the submarine community is really great to have because it's a conversation starter and gets the word out there for people that may not otherwise understand what it looks like when a ship's underway,” said Senior Chief Petty Officer Joshua Schrodes, assistant navigator for Norfolk-based Submarine Squadron Six.

“It takes a lot of the pressure off when you're trying to put things into context speaking with family and friends that wouldn't understand otherwise.”

While the film doesn't say where the fictional USS Arkansas' home port is, most of the movie is set around Russia in the Arctic Circle. That's typically the territory patrolled by East Coast-based submarines. All Virginia-class subs on the East Coast are home ported in Norfolk or Groton, Conn.

Capt. Dan Packer, the former commanding officer of the submarine USS Seawolf, said he took his wife and 16-year-old son to see the film and that they peppered him with questions the rest of the weekend.

“They loved it,” he said. “It was a great opportunity to show off what dad does in a way that they could understand.”

Packer was involved in the U.S. response to the lost Argentinian submarine San Juan this past year. He noted that the film involves a similar search effort and he thought how it was shown in the film is “exactly how we would do that.”

For younger submariners, the film is one that will likely be watched over and over throughout their careers just like the classic Cold War-era drama “The Hunt for Red October” has been for many others.

For Seaman Rodney Slater, a logistics specialist who serves aboard the recently christened USS Delaware, Hunter Killer has already surpassed another classic movie among submariners, the comedy “Down Periscope” featuring Kelsey Grammer.

“It's No. 1 for me. I will probably watch it again multiple times. My family, just friends who have never seen a submarine or anything, just show them this movie,” Slater said. “This is a glimpse of what we do every day and not a lot of people get to see.”