One dead, one injured in domestic dispute at Hurlburt Field

One person is dead, and another is injured and has been taken to a local hospital, in connection with a domestic disturbance involving gunfire that erupted late Friday afternoon at Hurlburt Field, headquarters of Air Force Special Operations Command 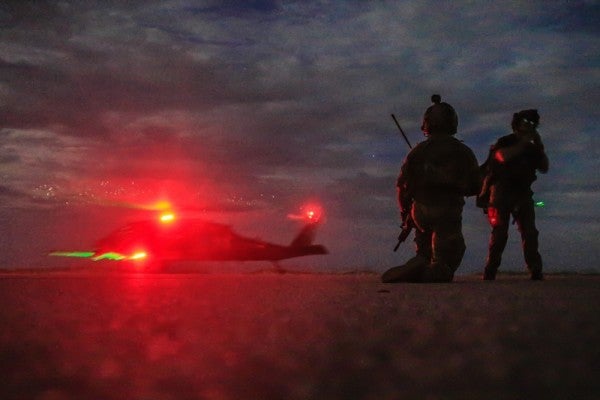 HURLBURT FIELD — One person is dead, and another is injured and has been taken to a local hospital, in connection with a domestic disturbance involving gunfire that erupted late Friday afternoon at Hurlburt Field, headquarters of Air Force Special Operations Command.

The incident prompted a shutdown of the installation to all but essential personnel for a time late Friday afternoon into early Friday evening.

The incident, now under investigation by the Air Force Office of Special Investigations, began unfolding at about 4:30 p.m, according to 2nd Lt. Janell Venerable, public information officer for the i1st SOW, host unit at Hurlburt Field.

Following initial reports of a domestic disturbance on the installation, Hurlburt Field was placed on a lockdown, which was lifted early in the evening after an “all clear” was issued to base personnel.

The “all clear” came after Hurlburt Field military security personnel and local civilian law-enforcement officers had secured the scene of the incident, which apparently occurred on Grimm Lane in the on-base housing section of the installation.

Word of the reported disturbance began leaking out of the base late Friday afternoon, as the base command post sent a message to all Hurlburt Field personnel reading, in part, that the installation was”closed due to an armed disturbance.”

The message went on to notify “(e)veryone in the area of Grimm Place (to) shelter in place.” The message was an apparent garbled reference to the installation's Grimm Lane, located west of the base entrance off U.S. Highway 98.

Base security forces responded to the domestic disturbance, and were later joined by local civilian law-enforcement personnel.

According to Michele Nicholson, public information officer for the Okaloosa County Sheriff's Office, the office's special response team and its crisis negotiation unit responded to the Hurlburt incident.

1st SOW public affairs personnel will be updating information on the incident throughout the evening, according to Venerable, via the Hurlburt Field page on Facebook and through news releases.

She expressed condolences “to all affected by this senseless tragedy” and thanked base security personnel and the Okaloosa County Sheriff's Office for their “outstanding response.”

Schermerhorn went on to write that the “1st Special Operations Wing “does not condone domestic violence” and works “to mitigate this needless violence through our on-base resources and programs that are offered to all Hurlburt Field members.”

Schermerhorn closed her message with a note of thanks to the community “for your continued support of our airmen and families during this time.”