Dorian is expected to crash into Florida with 140 mph winds. 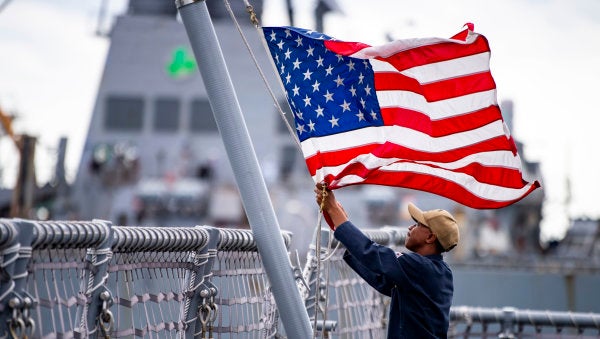 Editor's Note: This article by Oriana Pawlyk and Gina Harkins originally appeared onMilitary.com, a leading source of news for the military and veteran community.

Florida-based troops and their families are being urged to make hurricane preparations as Hurricane Dorian picks up speed as it careens toward the state, forcing aircraft and ships to be moved out of the storm's path.

Dorian is expected to make landfall in Florida on Monday evening as a Category 4 storm. The hurricane is expected to pack 140 mph winds and pummel the state with heavy rainfall, bringing the threat of dangerous storm surges.

Maj. Gen. James Eifert, head of the Florida
National Guard, said during a Friday press conference that nearly 2,000 Air Force and Army Guardsmen would be mobilized by the end of the day.

Here's a look at how bases across the state are preparing ahead of the potentially dangerous storm.

MacDill Air Force Base, home to U.S. Central Command and Special Operations Command, evacuated its KC-135s from the 6th Air Mobility Wing, according to base news release. The base has 24 assigned tankers and is expected to fly out at least 18, according to the Tampa Bay Times. The aircraft will be temporarily stationed at McConnell Air Force Base in Kansas, through the duration of the storm.

“The safety of our service members, families and aircraft are paramount,” Col. Stephen Snelson, 6th Air Mobility Wing commander, said
in a release. The base is in the Tampa Bay area on the western side of the state.

Should the hurricane follow one of its projected models straight for Tampa, the surge “could cause significant … flooding,” MacDill officials
warned on Facebook. “It would also cause a base evacuation 24-48 hours in advance of the storm's arrival. As you can imagine, we are hoping for the best but preparing for the .”

“We realize that everyone is waiting for the base to make an evacuation decision,” the message added. “We will coordinate any evacuation order with Hillsborough County and mission partners.”

Just outside Orlando,
Patrick Air Force Base, home to the 45th Space Wing and the Air Force Reserve's 920th Rescue Wing, has already closed down a number of facilities ahead of the storm. Closures include the family readiness and fitness centers, along with a number of recreational spots. The Medical Group is also curtailing operations, according to a base release.

It's unclear
whether the base evacuated its HH-60G Pave Hawk helicopters and HC-130P/N recovery planes. Officials with the 920th could not be reached by press time.

Homestead Air Reserve Base flew out its
F-16 Fighting Falcons ahead of the storm, base spokesman Timothy Norton told Stars and Stripes. The base, which was destroyed during Hurricane Andrew in 1992, sits south of Miami. There are no personnel living on the installation.

Any aircraft unable to leave the base will be moved to hangars for the duration of the storm, according to the release.

Troops based at the air station were encouraged to discuss evacuation and reporting requirements with their chain of command.

The Navy also began moving ships based at
Naval Station Mayport in Jacksonville out of the storm's path on Thursday night. Rear Adm. Don Gabrielson, head of Naval Forces Southern Command, said the safety of sailors and their families, along with the security of ships and aircraft, remained a top priority.

“We appreciate how our families support our missions even as their own homes face the risk of these difficult storms,” Gabrielson said in a statement.

The patrol ship Shamal got underway Thursday, according to a Navy news release. The guided-missile destroyers Lassen, Paul Ignatius, Farragut, along with the
littoral combat ships Billings and Milwaukee were expected to get underway Friday.

The ships have been directed to areas of the Atlantic where they can avoid the storm.

Sailors and their families on base are urged to sandbag flood-prone areas, get extra fuel, remove debris from drainage areas, and relocate dumpsters and equipment that could be swept up in floodwaters to more secure areas.

The
Coast Guard has set conditions at several ports in Florida at “X-ray,” which means they're open to commercial traffic, but mariners are warned that high winds are coming and that there are no safe havens in the facilities.

“Ports are safest when the inventory of vessels is at a minimum,” a Coast Guard release states. “All ocean-going commercial vessels and ocean-going barges greater than 500 gross tons should make plans for departing the port.”

The service is advising all recreational boats to stay out of the water.

The Coast Guard is advising people do the same, with officials telling them to steer clear of beaches. Families should have disaster plans, including for pets, and people should secure belongings on their property to prevent them from being swept away by floods.

The service is also warning people not to rely on social media for storm-related information or to report emergencies.

“People in distress should use 911 to request assistance whenever possible,” a service news release states. “Social media should not be used to report life-threatening distress due to limited resources to monitor the dozens of social media platforms during a hurricane or large-scale rescue event.”

Others are keeping track of the storm from on high.

Earlier this week, three
WC-130J “Hurricane Hunter” aircraft and one C-130J Super Hercules aircraft from the 403rd Wing at Keesler Air Force Base, Mississippi, flew to the Curaçao island in the Caribbean to provide weather reconnaissance for Hurricane Dorian, according to the service.

The Hunters, of the 53rd Weather Reconnaissance Squadron, collect data that helps the National Hurricane Center determine which category to classify the storm, in addition to how far out the winds go and how strong they are.

The teams use a device called a dropsonde, which is ejected from the aircraft into the water. The biodegradable and non-recoverable sensor measures temperatures, dew-points, pressure, and wind speeds and direction. The sensors also mark the storm's location.

Dozens of the sensors can be dropped in a single six-to-10-hour mission, collecting data from each device as the WC-130 flies through the storm.