Editor’s Note: This article by Gina Harkins originally appeared on Military.com, the premier source of information for the military and veteran community. Tens of... 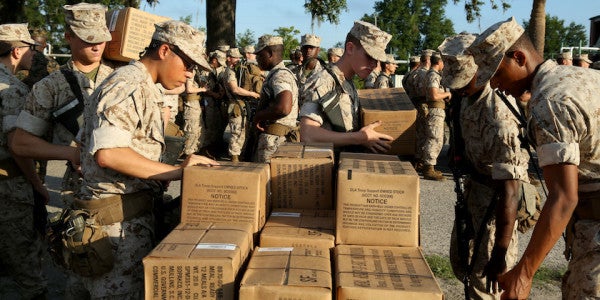 Tens of thousands of troops, their families and recruits are evacuating at least five military bases Tuesday as millions have been told to get out of the path of Hurricane Florence, which could cause widespread devastation.

Florence is expected to make landfall Thursday night, and government leaders from the Carolinas up to Maryland have already declared states of emergency. While the storm has weakened slightly, the National Hurricane Center is warning that it could still pick up speed, making it one of the strongest hurricanes facing North and South Carolina in decades.

The Virginia National Guard is planning to activate up to 1,500 troops for possible assistance during the hurricane, and Gov. Ralph Northam has authorized another 6,000 to remain on standby.

Military bases from Virginia down to South Carolina fall in the evacuation zones and, so far, five commanders have ordered service members and their families to prepare to leave their homes.

Here's a look at the bases affected so far, and which installations could be next.

Recruits at the fabled training depot just north of Hilton Head will begin relocating at noon Tuesday to Marine Corps Logistics Base Albany in Georgia, where they will continue their training.

“I have determined the safest course of action is to evacuate,” Brig. Gen. James Glynn, Parris Island's commanding general,said Monday.

Charlie Company, which is expected to graduate this week, will be moved to Albany, where it will hold its ceremony. Family is not permitted to attend, but Glynn said the event will be streamed on Parris Island's website and social media channels.

Non-essential military personnel and civilian employees have been directed to move at least 100 miles to safety, but no more than 400. They'll be reimbursed for authorized evacuation expenses, including tolls and lodging, and are directed to remain in those locations until their chains of command instruct them to return.

The evacuation order also applies to Marine recruiting offices in the area that will be affected by the storm.

Beaufort County is one of 25 the South Carolina governor ordered to evacuate, and that includes all non-essential military personnel there.

Like Parris Island, that evacuation begins Tuesday at noon.

“As commanders, we have a responsibility to each of you and your families,” Col. Timothy Miller, the air station's commanding officer,said in a video message released Monday. “For your safety and security, we have issued this evacuation order well before the storm in an effort to ensure everyone is able to seek refuge before the storm impacts the area.”

The evacuation order is not optional, Miller added. Families could begin departing the area before noon Tuesday.

Personnel at Joint Base Charleston were ordered to begin evacuations Monday night.

“The has been issued to ensure the safety of our personnel and their families in support of [Gov. Henry] McMaster's evacuation efforts,” Col. Terrence Adams, 628th Air Base Wing, and Joint Base Charleston commander,said in a statement.

Those considered non-essential should contact their duty sections for further instructions on evacuations, and to set up transportation for anyone who needs it.

Personnel there are also in the process of moving the base's C-17 Globemaster III aircraft to safe haven locations.

Everyone authorized to leave the base must do so by Wednesday at 6 p.m., according to the order. Evacuees are authorized to temporarily relocate no more than 750 miles from base.

Troops and their families are responsible for making sure their pets or service animals are removed from the base.

U.S. Airmen from the South Carolina Air National Guard and 169th Fighter Wing, prepare to deploy from McEntire Joint National Guard Base to Bluffton, South Carolina, to support partnered civilian agencies and safeguard the citizens of the state in advance of Hurricane Florence, September 10, 2018.

All Navy and civilian personnel who live in the Hampton Roads area and fall under Virginia's evacuation zone A have been authorized to evacuate.

“Roadways, interstates and highways will be congested as residents will be traveling to various safe havens,” Rock said. “I ask that everyone traveling please keep safety in mind and remember to muster with their chain of command when they reach safe haven.”

Personnel at the Dam Neck Annex have also been told to prepare for evacuation. Advancement exams for all sailors scheduled to take them have been canceled. Make-up dates will be announced at a later date, according to a message posted Monday.

Marines and sailors at Camp Lejeune aren't facing a mandatory evacuation, but most will be allowed to leave after 4 p.m. Tuesday and will be granted special liberty status through the weekend.

That leaves those who choose to evacuate paying for travel and lodging on their own.

“Non-essential personnel are free to voluntarily depart and relocate their families to a site within a 500-mile radius of Jacksonville, NC,” officials said in a Tuesday statement. “Families can also be moved to one of the emergency shelters on base, or in the surrounding area.

Everyone is expected to be back at work on Monday at 7 a.m. Commanders should determine what personnel and services are considered essential during the storm.

Several military bases remain in Florence's paths but have not been given official evacuation orders yet. Some of those bases include:

“They will still have a local ceremony in their units, it just won't be involving families,” Pat Jones, a spokesman for Fort Jackson, told Military.com.

Jackson officials decided to cancel family day activities for Wednesday and Thursday's graduation rather than postpone it because the post holds BCT graduation every week.

“If we were to actually delay it, we could throw them out of their next class,” Jones said.