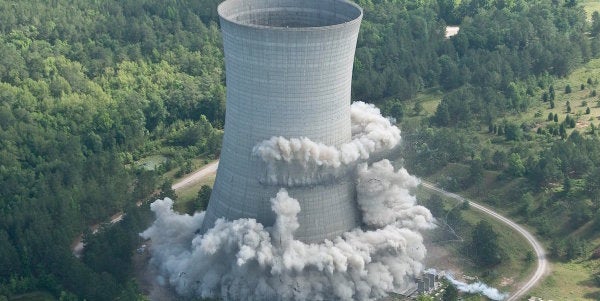 Yet National Hurricane Center forecasts suggest the Texas-size storm may penetrate deep into the US mainland after pummeling Florida, blowing down trees, knocking out power, and triggering flooding far away from the sea.

During the Cold War, scientists and technicians there produced weapons-grade bomb material for the US military as well as plutonium-238 for NASA's pluckiest spacecraft. These activities also created millions of gallons of nuclear waste that's stored in dozens of tanks, plus burial grounds filled with contaminated objects.

With Irma threatening powerful wind and heavy rains across the Savannah River watershed, of which SRS is a part, some experts have expressed concern.

“If Hurricane #Irma track predictions hold, it will pass close to or even directly over DOE's Savannah River Site. That could be very bad,” Stephen Schwartz, an independent nuclear-weapons policy analyst and author of “Atomic Audit: The Costs and Consequences of US Nuclear Weapons Since 1940,” wrote in a tweet on Thursday. (Irma's path later shifted west, but the NHC still has the site on the edge of the storm's “cone of probability.”)

Schwartz went on to sum up the cache of SRS' waste, which includes about 35 million gallons of liquid radioactive waste, 195 acres of dirt-trench burial grounds filled with contaminated gear, and even thousands of tons' worth of nuclear contamination from Greenland and Spain.

The most dangerous waste is contained in 51 large storage tanks. Less dangerous “low-level” waste (clothes, tools, equipment, and more laced with radioactive contamination) was dumped into unlined pits and covered with earth over the decades.

A major effort is underway to empty and seal the storage tanks, solidify the waste into glass, and entomb it underground, as well as construct up-to-standard disposal units.

However, there's still billions of dollars' and decades' worth of work that remains, given current nuclear-cleanup funding levels.

“The problem with the tanks and flooding isn't so much that the tanks will leak … it's more the stuff that has leaked out over the years,” Schwartz told Business Insider. “If there's severe flooding, it could move that stuff around and into the ground water.”

Schwartz also said the burial grounds may pose a lesser though significant risk. “If you've got a contaminated tool or bulldozer, which there are, that's not going to move,” he said. “But the uranium, plutonium, and other stuff stuck to clothing and dirt and equipment could potentially start migrating very far.”

He added that SRS is situated on top of an aquifer that supplies several states with drinking water.

Business Insider contacted the Savannah River Site (which is owned by the US Department of Energy) with several questions about leakage risks tied to flooding. Monte Volk, a spokesperson for SRS and DOE, emailed the following statement in response:

“The Savannah River Site (SRS) is implementing emergency planning and response activities in preparation for Hurricane Irma. Those planning activities include standing up the SRS emergency response organization; identifying all necessary site resources; daily coordination with site operations and state/local emergency planning organizations in South Carolina and Georgia. All critical SRS site operations will be maintained at safe levels during the hurricane. Response equipment and fuel is staged in critical areas on site and available for response activities.

“SRS takes a very measured approach when it comes to the safety of the public, our workers and the environment. We routinely practice emergency response procedures to ensure our employees are trained and ready.

“Additionally, Department of Energy nuclear facilities are robust structures, systems and components with multiple layers of safety designed and built into them. Federal regulations require these facilities be able to withstand extreme natural events including hurricanes and floods.”

Volk later spoke to Business Insider on the phone, saying that, “as far as a tank leaking into the environment, we don't have that.” He also said that low-level waste burial grounds were capped several years ago to prevent leakage, but stopped short of assuring that an Irma-induced flood didn't pose a risk for the leakage of waste.

However, Volk said that SRS was built with flooding and hurricanes in mind, and described systems that now pump, capture, and filter contaminated groundwater.

“They're pretty robust, and … safety features are built-in. We expect them to perform, and we have crews standing by to perform in case something doesn't perform,” he said. “If I had reservations about that, I guess I wouldn't be working out there.”

With the anticipated Tuesday arrival of Irma — or what's left of its stormy remnants — forecasters expect the nearby city of Augusta, Georgia, to get about five inches of rain. This is not a dozens-of-inches deluge that plagued regions slugged by Hurricane Harvey, and SRS weathered five inches of rain from Hurricane Hugo in 1989 without much effect.

Meteorologists are careful to hedge their predictions about Irma, though, since it's mostly unprecedented in terms of size and strength.

Even if the storm completely misses SRS, Schwartz said finishing the cleanup work is overdue.

“I don't want to say we're racing against time here, but this is a problem that SRS has faced for a long, long time,” he said. “The sooner we can get out of the ground, the better.”