After Irma, Navy Takes On Unusual New Mission In US Virgin Islands: Aid

ABOARD THE USS KEARSARGE — Under normal circumstances, the sailors aboard the USS Kearsarge would be training for their primary... 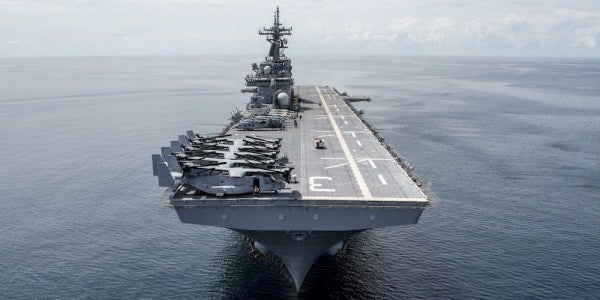 ABOARD THE USS KEARSARGE — Under normal circumstances, the sailors aboard the USS Kearsarge would be training for their primary job — putting Marines ashore in an amphibious operation to attack a target, and support them until the mission’s done.

But it’s not normal circumstances that brought the USS Kearsarge and the other ships of the U.S. Navy’s Expeditionary Strike Group 2 — otherwise known as ESG-2 — to the waters of the U.S. Virgin Islands.

However, its capabilities for war mesh almost perfectly with the strike group’s current mission — assisting in recovery efforts on St. Thomas and St. John, recently ravaged by the Category 5 winds from Hurricane Irma.

“We’re always preparing for the full range of military operations from what we call ‘the high-end kinetic warfight,’ all the way back to what we also prepare ourselves for — humanitarian assistance and disaster relief,” said Adm. Jeffrey Hughes, commander of ESG-2.

“I like to view the Navy as we generate influence. We’re forward deployed, we’re present, we’re responsive, we’re flexible and we’re always out there, and things can happen — a tsunami for example. We just happen to be in the right place at the right time to go in and provide an initial response, and lend and render support.”

“We’re mariners, even the Marines, and when someone’s in distress, it’s an expectation that you render assistance to someone in distress. That’s kind of in our DNA,” he said. “We can help people in need, and we’ve got unique capabilities.”

For example, C-17 and C-130 cargo planes from the U.S. Air Force have made regular runs to Rohlsen Airport on St. Croix and King Airport on St. Thomas delivering equipment and supplies; while the U.S. Army has supplied helicopters and medical and engineering personnel.

But it’s been the U.S. Navy and U.S. Marine Corps that have taken on the greatest task, especially on St. John, which was hit hard by Hurricane Irma.

The USS Kearsarge, stationed off the southeastern corner of St. Thomas, has deployed troops from the 26th Marine Expeditionary Unit to St. Thomas to assist with rescue and recovery efforts there, and its MH-60 and MH-53 heavy-lift helicopters and MV-22 Osprey tilt-rotor aircraft of the 2nd Marine Aircraft Wing and the ship’s three Landing Craft Utility — otherwise known as LCUs — moved personnel and supplies to St. John in the relief efforts there.

“We train for this mission, and we’ve done it for many, many years,” said Col. Farrell Sullivan, commanding officer of the 26th Marine Expeditionary Unit, based at Camp Lejeune, N.C. “Not just for support to CONUS [Continental United States] response, but for foreign disaster relief, like what happened in Indonesia with the tsunami.

“You go back and look at all the big ones that have happened, particularly in the Pacific and earlier than Katrina, you’ll see that Army, Navy, Air Force, Marines — they’ve all been a part of it,” Sullivan said.

The USS Oak Hill, stationed in the channel between St. Thomas and St. John, has used its LCUs and Light Amphibious Resupply Cargo vehicles — called LARCs, a wheeled amphibious truck that can carry up to 5 tons of supplies — to move equipment, personnel and cargo to areas of St. John that are largely inaccessible by vehicles, such as the Coral Bay.

“The Navy-Marine Corps team is ideally suited for something like this,” Hughes said. “We come in here with the ability to generate effects with 20-plus tilt-rotor aircraft and helicopters that can go in. We’ve got landing craft that can move bulk equipment and allow the Marines and Seabees to establish themselves on shore.

“We’ve got the ability to really address this problem from the land, the sea and the air, and command and control it from a sea base.”

Both the USS Kearsarge and USS Oak Hill deployed out of Naval Station Norfolk in Virginia on Aug. 30 to assist with the rescue and relief efforts off the Texas coast in the wake of Hurricane Harvey, a Category 4 hurricane that hit the region in late August.

But those plans changed when Hurricane Irma ripped through the Caribbean, demolishing Barbuda, the British Virgin Islands, and St. Thomas and St. John with winds greater than 185 mph.

According to Hughes, the USS Wasp was already in the region on a regularly-scheduled deployment when the hurricane approached.

“We were watching their track to make sure if they had storm avoidance,” Hughes said. “But it was one of those things Navy’s mission in USVI is outside the norm as Irma looked like it was going to make landfall, we said ‘Okay, why don’t you get to safe haven and hold.’

“As soon as that storm came through, they came right back up. They were flying helicopters into St. Thomas at first light on the morning after the storm.”

The USS Kearsage and USS Oak Hill were redeployed immediately after, arriving in the territory’s waters two days later, with the Marines and helicopters in operation almost immediately.

The USS Wasp, which was not carrying landing craft as part of its deployment, moved to a position between St. Thomas and St. Croix, and is serving as a mid-point stop for helicopters carrying cargo and personnel between the islands.

“That’s what makes the Kearsarge, the Wasp and the Oak Hill such a unique capability in these kind of events,” Sullivan said. “We call it a ‘sea base.’ It allows us to not put a big footprint on the ground, and impose of the local population and local authorities who already have enough to do. Everything that we need we can flow from the ship, or bring back to the ship.”

Hughes made one thing very clear — the U.S. military is not in charge of the rescue and recovery operations in the U.S. Virgin Islands.

That job is in the hands of the USVI government and its agencies, and the Federal Emergency Management Administration, otherwise known as FEMA.

The military’s role — in particular, what the Marines and sailors, the helicopters and landing craft, of ESG-2 — is to provide the support in areas that the government agencies don’t have the needed capabilities.

“I had some time with Katrina and now here,” Hughes said. “We just can’t show up somewhere and start doing stuff. The lead federal agency, in this case FEMA, we work very closely with them, and we won’t do things unless we receive tasking from them. We’re equally mindful of working through the governor of the territory of the Virgin Islands.”

That’s Hughes’ job — not only commanding the strike group, but coordinating with the various federal and local government entities.

“All the while, I’m communicating with all of our partners,” he said. “FEMA is the lead federal agency, and we work with them through the DoD [Department of Defense] chain of command; and the Title 32 forces such as the National Guard and Reserves, and helping bring all that to bear.

“I have great connectivity with the adjutant general and the dual-status command,” he said, referring to the head of the V.I. National Guard. “I’m in contact with them five times a day, either by voice or email from here, and I fly in and see them a lot.

There will be a time, Hughes said, where those Navy ships that people can see sitting just offshore of St. Thomas and St. John won’t be there — and that will be a good thing, he added.

“Again, this is not our primary thrust, but we add a very unique initial response capability,” Hughes said. “Then, over time, other people that come in who are more suitably equipped in this mission area, we do a handoff and they pick it up and run with it.

“We work through a structure, and we have this big partnership arrangement where there’s certain things we can do to help, and some other things that somebody else might be suited for. But when you bring it all together … at the end of the day, we have unity of effort. We all work together to match the right capabilities to the highest-priority needs.”

One thing may slow the U.S. military’s operations down in the territory — the approaching Hurricane Maria.

Course predictions from the National Hurricane Center have the storm tracking just to the south of St. Croix, with estimated arrival Wednesday morning.

“We’ll probably pull out sometime Tuesday,” Hughes said. “But once the storm passes, we’ll be right back here, conducting operations.”

Why? Because it’s a job they’ve been ordered to do — yet it’s one that’s providing a certain sense of satisfaction among the officers and enlisted ranks alike.

“It’s nice to know that we can just help people, and not just be training for a wartime effort,” said Petty Officer 2nd Class Jordan Gilles of Edmond, Okla., a member of a LARC crew. “It shows that we can get out there and help other countries in disaster relief too, we’re not just helping our own. We can go out and help anybody. We’re not just a force to be reckoned with by our enemies, we’re also a helping force for other people.”

Said Sullivan: “The Marines and sailors who have gone ashore to clear routes, deliver supplies, to help organize airfields, all the things that have happened, it’s not easy work — it’s hot out there. But they’re interacting with the local population, and the message they’ve gotten back from the people is ‘thank you; the fact that you’re here lets us know that we’re not forgotten.’

“The sense of pride, motivation and focus that’s generated in our Marines and sailors has exceeded my expectations,” he said. “They’ve been decisively engaged, and they love being able to help fellow Americans.”