Hypersonic weapons can travel more than five times the speed of sound, or around one mile per second. 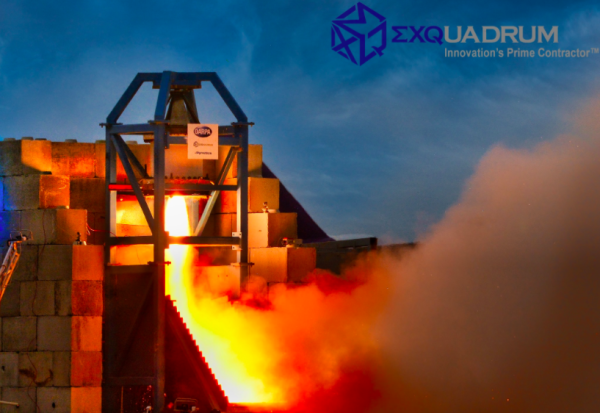 Exquadrum officials said Thursday that the firm had demonstrated its rocket propulsion system at “full scale” and for “full duration” at the company's FORGE Rocket Test Facility at the Southern California Logistics Airport in Victorville.

This test is the culmination of Phase 2 of the company's $15.1 million DARPA contract, which it was awarded in September 2018. Exquadrum and Dynetics of Huntsville, Alabama, worked jointly to develop the second stage of the OpFires weapon system.

The goal of the OpFires program is to develop and demonstrate a novel ground-launched system enabling hypersonic boost glide weapons to penetrate modern enemy air defenses and rapidly and precisely engage critical time-sensitive targets, according to DARPA.

Hypersonic weapons can travel more than five times the speed of sound, or around one mile per second. The types of weapons include hypersonic cruise missiles that are powered by rockets or jets throughout their flight, according to the Economist.

“Exquadrum and our partner, Dynetics, are grateful to DARPA for providing us the opportunity to take a highly innovative propulsion technology from idea to full-scale with many of the key components in their flight-like configuration,” Exquadrum Chief Executive Officer Kevin E. Mahaffy said in a statement. “This technology is now ready to transition to a host of advanced flight applications from hypersonics to traditional rocket booster systems.”

Related: Get Ready For The Era Of Hypersonic Flight — At Five Times The Speed Of Sound

Executives at the Adelanto-based Exquadrum said its unique liquid augmented solid motor has a wide range of “throttleabilty and energy management capability,” which proved ideal for the OpFires mission objectives. These same rocket characteristics are beneficial for a variety of hypersonic weapons, missile defense, and space lift applications, the company said.

Both companies have previously supported DARPA on technology advancement projects. Exquadrum was a prime contractor on the Force Application and Launch from Continental U.S. (FALCON) program.

DARPA, or the Defense Advanced Research Projects Agency, is part of the Department of Defense. It is responsible for developing of emerging technologies for use by the military.

DARPA dates back to the Space Race and the launch of the Soviet Union's Sputnik satellite in 1957, when the U.S. committed that it would be the initiator and not the recipient of strategic technological surprises.

Related: The US Military Is Going All In On Hypersonic Weapons

Among the technologies that DARPA says it has fostered are precision weapons, stealth aircraft, the Internet, automated voice recognition and language translation, and Global Positioning System receivers small enough to embed in consumer devices.

DARPA says it has about 220 employees in six technical offices, including nearly 100 program managers, who together oversee about 250 research and development programs.

Exquadrum's other customers besides DARPA include the United States Air Force, the Missile Defense Agency, the Defense Threat Reduction Agency, and others.

In March, Exquadrum held a groundbreaking ceremony for its corporate headquarters at SCLA. “Ready For Launch” was the theme of the event, which drew more than 140 community stakeholders, small business owners, elected officials, and employees.

“Exquadrum is investing locally in people, property, and prosperity. Yes, we gain from our investments from a business perspective, but we also gain from lifting where we stand in a more intangible way,” said Exquadrum President Eric Schmidt.