The officer told the Washington Post that Hyten made unwanted sexual contact with her multiple times, including allegedly sexually assaulting her in December 2017. 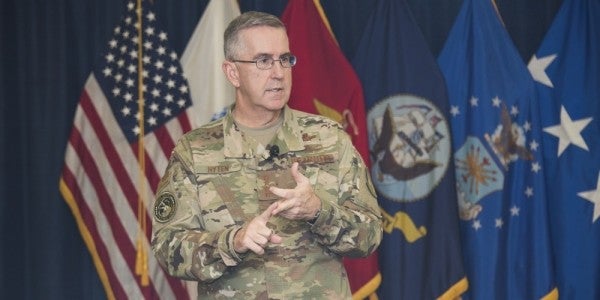 A military officer is reportedly willing to testify before lawmakers that Air Force Gen. John Hyten, who has been nominated to become the next vice chairman of the Joint Chiefs of Staff, sexually assaulted her.

The Washington Post reported on Thursday that the unnamed officer stated she could agree to testify under oath to the Senate Armed Services Committee hearing, which is considering Hyten's nomination, that the Air Force general made unwanted sexual contact with her multiple times, including allegedly sexually assaulting her in December 2017.

The Pentagon released a statement supporting Hyten after Defense One first reported that lawmakers had been briefed about the sexual assault allegations against him.

“After a comprehensive investigation by the Air Force Office of Special Investigations, there was insufficient evidence to support any finding of misconduct on the part of Gen. Hyten,” Air Force Col. DeDe Halfhill, a Pentagon spokeswoman, said in the statement. “Gen. Hyten cooperated with the investigation. With more than 38 years of service to our nation, Gen. Hyten has proven himself to be a principled and dedicated patriot.”

The officer told the Associated Press that Hyten retaliated against her after she rebuffed his unwanted sexual advances while working as his aide. She accuses him of kissing, hugging, and rubbing up against her.

Despite receiving superlative performance reviews from Hyten, the officer was eventually investigated for toxic leadership and received a letter of reprimand, the Associated Press reported. The military rejected her request for retirement and she subsequently received another negative review from Hyten.

“U.S. Strategic Command fully cooperated with the investigation by the Air Force Office of Special Investigations,” STRATCOM said in a statement to Task & Purpose. “According to Air Force officials, there was insufficient evidence to support any finding of misconduct on the part of Gen Hyten.

However, now that lawmakers are aware of the allegations made against Hyten, his nomination to become vice chairman of the Joint Chiefs of Staff could be in jeopardy.

Sen. Tammy Duckworth (D-Ill.) and Sen. Elizabeth Warren (D-Mass.) have raised questions about whether Hyten received “preferential treatment because of his rank and pending nomination” as vice chairman of the Joint Chiefs of Staff.

In a June 25 letter to Acting Defense Secretary Mark Esper, the two senators wrote that Gen. James Holmes, head of Air Combat Command, should not have been the convening authority for the investigation into Hyten.

“The severity of the allegations and the sensitivity and seniority of Gen. Hyten's billet demand that a senior officer – not a peer, and certainly not a peer who is junior in grade to General Hyten – should be the convening authority,” Warren and Duckworth wrote.

The senators have asked Esper for an unredacted copy of the Air Force's investigation into Hyten and answers to questions about whether the Pentagon followed its own procedures during the investigation.

“Only with that information will we be able to give his nomination a full and fair consideration,” they wrote.