"You can ignore these problems. You can pretend they never happened ... or you can you can try to make a difference." 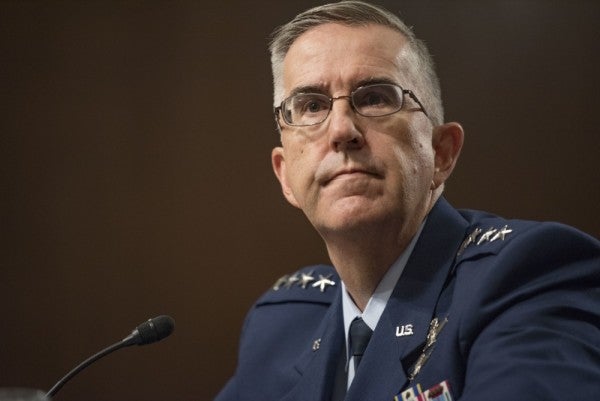 Faced with a lawsuit alleging he sexually assaulted a subordinate female officer, Air Force Gen. John Hyten, vice chairman of the Joint Chiefs of Staff, strenuously maintains that he is innocent.

However, he said, the experience of being accused has made him more aware of the problem of military sexual assault — and now he wants to be part of the solution.

Beginning next week, the Joint Staff will have a special assistant who will analyze people and family programs — such as sexual assault and domestic abuse prevention and response, suicide prevention and response, mental health treatment and privatized housing — among other key issues impacting both the military and civilian force, Hyten told Military.com in an exclusive interview Thursday.

Creating the position is just one of Hyten's priorities as he begins his new role as vice chairman, because it puts a spotlight on improving the lives of service members and their families, he said.

It began with a simple suggestion.

Hyten's daughter Katie was present for his tense confirmation hearing before the Senate Armed Services Committee last July and later offered her point of view.

“My daughter pointed out something really important to me as I came out of that, and she pointed out that because of what I've been through over the last year,” the general during the interview at the Pentagon.

“My daughter works with a lot of these areas, and she said, 'You have a choice you can make. You can ignore these problems. You can pretend they never happened and just move on with your life. … Or you can decide — because of your experience — you can try to make a difference.' And so I decided I'm going to try to make a difference in these areas,” Hyten said. “When you look across the Joint Staff in particular, you don't see a single general officer responsible for what I call the 'people and family programs.' So I'm going to create a focal point here.”

As stated by the Air Force when the allegations surfaced in July, the report showed that investigators were unable to corroborate an unprofessional relationship when Spletstoser, in the Army for 28 years, worked for Hyten at U.S. Strategic Command as his Commander's Action Group director.

The Senate Armed Services Committee advanced Hyten's nomination in a 20-7 vote in September. Spletstoser, who was also present for the Senate hearing, maintains her claim of unwanted sexual assault by the general.

In November, she filed a federal lawsuit against Hyten seeking $5 million in damages. The lawsuit is pending.

“We are aware of the lawsuit that was filed in a California federal court,” Guillebeau said. “As is our practice in all ongoing litigation, we are not going to comment on the details.”

Hyten, who has served for nearly 40 years, said programs that have been implemented or overhauled to help sexual assault and suicide victims have fallen short. “I know that what we're doing hasn't been working in many of these areas. We haven't been making the improvements that we want to,” he said.

The Pentagon for years has attempted to improve its sexual assault and harassment prevention programs, as well as the services' handling of reports and prosecutions. But the Defense Department's fiscal 2018 Report on Sexual Assault in the Military released in May found that roughly 20,500 service members experienced sexual assault that year — up from an estimated 14,900 in 2016.

The special assistant will give Chairman of the Joint Chiefs Gen. Mark Milley and staff “an outsider's view on this problem because she is an outsider coming in without experience in the Department of Defense,” Hyten said.

“She's not going to do anybody else's job,” he added.

The Pentagon still has a long way to go to earn victims' trust in the reporting system, but Hyten said he's a big believer in the truth.