If jet radars don’t raise cancer risk, why did the Navy coat some cockpits in gold?

Former Navy and Air Force pilots or their surviving spouses have expressed to McClatchy their concerns about the high number of prostate, brain, blood and other types of cancers affecting their community, and some have wondered whether radars on military aircraft might have been a factor. 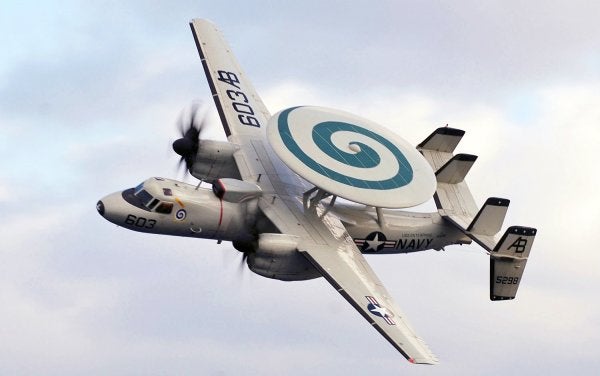 WASHINGTON — On night missions in the 1980s, when the beam from the E-2 Hawkeye's radar swept over the cockpit, pilots could generate electrical arcs by holding the metal base of their flashlights close to the metal paneling around them.

The arcs “would kind of light up the cockpit at night every time the radar went by,” said retired Hawkeye pilot Navy Capt. Ralph Ricardo.

The Hawkeye is an early warning aircraft that is highly recognizable by the large dome-shaped radar on top of the plane. It is used to protect aircraft carriers, detect enemy aircraft or missiles, and act as an airborne command station for the Navy's fighter jets.

In flight, the Hawkeye's dome would complete a full rotation and the beam would sweep above the cockpit about every 10 seconds.

Some pilots at that time wondered what the radar was doing to them when swept past, if it could create such electrical arcs.

“Then, about halfway through my tour, all the sudden they decided to put the gold coating on all of the windows and the escape hatches,” Ricardo said. After that, the pilots couldn't create the same electrical arcs, he said.

“It was obviously to keep the radar out of the cockpit,” Ricardo said. “I thought … I've been flying for years without it, what's been happening to me in the meantime?”

Former Navy and Air Force pilots or their surviving spouses have expressed to McClatchy their concerns about the high number of prostate, brain, blood and other types of cancers affecting their community, and some have wondered whether radars on military aircraft might have been a factor.

A McClatchy investigation in October found that four of the commanding officers at Naval Air Weapons Station China Lake died of cancer in recent years. It also found that the Air Force was reporting a cluster of urogenital cancers among six of its F-15E Strike Eagle pilots and weapons systems officers between the ages of 33 to 43 at Seymour Johnson Air Force Base in North Carolina, and another among its Air Force Special Operations Command C-130 crews.

The E-2 Hawkeye pilots who spoke to McClatchy named other former pilots or crew members who also are facing cancer, or have died from the disease, at relatively young ages.

Ricardo, for example, has been treated for dozens of carcinomas since he was 37. His commanding officer from the 1991 Gulf War, Capt. J.J. George, died in 2011 at age 60 from lymphoma. In 2018, Ricardo lost one of his junior officers, E-2 Hawkeye pilot Cmdr. John Quinlan, who died three days before his 50th birthday from metastatic melanoma.

“I don't think the coating fixed the problem,” Ricardo said.

The Navy has said a deeper review is not warranted because there is not enough evidence of an increase in cancers among its aviation community, nor evidence that the radiofrequency (RF) radiation emitted from aircraft radars causes cancer. When McClatchy asked the Navy Bureau of Medicine and Surgery for copies of any previous Navy studies on radiation in the cockpits of its jets, the Navy said there were no previous studies.

Grumman Corp., which is now the Northrop Grumman Corp., added the gold coating onto the cockpit glass in the 1980s after it received data on cockpit radiofrequency radiation levels from E-2 pilots who were testing Hawkeye radar upgrades for the company.

“I think it (the test results) alarmed Grumman and the Navy so much that they put an adhesive gold foil on the overhead windows,” and later the side windows, said retired Navy Cmdr. Les Ryan, a former Grumman E-2 Hawkeye chief test pilot.

But that first generation of gold foil protection “was kind of a stopgap measure. It would peel at the corner, you could scratch it,” Ryan said.

In the absence of a current Navy-led study, former Navy pilots are trying to gather data themselves. Retired Navy Cmdr. Mike Crosby, a former F-14 radar intercept officer and founder of Veterans Prostate Cancer Awareness Inc., and members of several other aviator veterans groups are launching a survey to collect information from all current or retired military aviators who have been diagnosed with any type of cancer.

Hammerstrom, the senior engineering test pilot who conducted some of the tests for Grumman, had also experienced the cockpit electrical arcs — by holding lead pencils near any metal in the cockpit when the radar swept over — while flying missions for the Navy.

Based on that experience, when Grumman was proposing a new, stronger radar in the early 1980s, he and a few others asked, “Can we look into this? And they said, 'No problem,'” recounted Hammerstrom, now retired, in an interview with McClatchy about those 1980s tests.

Hammerstrom said that in 1982, he and other test pilots at the Grumman Flight Test Department began taking hand-held radiation meters into the E-2's cockpit to test for radiation levels during the radar's use in flight. Grumman's engineers taught Hammerstrom how to operate the meters and calculate the results, and he reported the measurements to them.

Northrop Grumman was contacted about the cockpit radiation tests and declined to comment.

National safety standards in 1982 lowered the safe level of human radiation exposure specific to the radiofrequency emitted from the Hawkeye's radar to between 1.3 to 1.5 mw/cm2, or milliwatts over centimeters squared, which the American National Standards Institute reported would be the maximum safe amount of absorption for the human body.

Some of the numbers Hammerstrom recorded during flight were higher. In the first round of tests, readings taken at the pilot and co-pilot escape hatch positions were 3.6 and 4.0 mw/cm2 when the radar was in a “searchlight,” or non-rotating, position. When the dome-shaped antenna was rotating, however, the levels recorded within known safe limits.

The team kept testing exposures in different configurations, including one where they covered the cockpit with aluminum foil shielding. When all cockpit glass was covered with foil, readings were also consistently within safe limits.

In an ensuing Grumman memo summarizing the 1982 test results, dated Feb. 22, 1983, the company reported that “an engineering study is underway to evaluate corrective action, such as coatings or screening materials.” The memo also said, “A Navy letter is being prepared to document the problem and request a meeting.”

The readings led to further review by Grumman and the addition of the gold foil to cockpits.

“I'm told that was one of the reasons they ended up putting gold in different forms in the cockpit,” Hammerstrom said.

At the time, gold was also being studied at Texas A&M University to make better protective suits for working with radiation. “Gold, one of the heaviest chemical elements, is the basis of a new lightweight plastic foam under development as a radiation shield,” a 1988 New York Times article reported.

The Grumman test readings are a rare insight into cockpit radiation. Of the aviation studies publicly available that focus on potential cancer exposure, most focus on the potential risk of exposure to harmful ionizing UV radiation experienced by flying at higher altitudes for prolonged hours, such as commercial flights across the Atlantic Ocean, not the non-ionizing radiofrequency radiation produced by radars.

However, in 2011 the World Health Organization's International Agency for Research on Cancer classified radiofrequency radiation as a “possible” carcinogen based on increased rates of brain cancer that may be associated with it.

“This 'possible' designation means that there is a level of suspicion, but the evidence is not sufficient” for WHO to identify RF as a cancer agent, said Kenneth Foster, a professor of bioengineering at the University of Pennsylvania who specializes in non-ionizing radiation.

Because there are so few pilots compared to the general population, it will be difficult to identify for certain what has caused these cancers, Foster said.

Due to “the rarity of cancer in the young adults who would be pilots, and the host of other things that they may have been exposed to, I think it would be difficult to establish any increase in cancer in these individuals and connect it with RF (radiofrequency) exposure,” Foster said.

But military aviators are asking for a study of any health impact from radars, as they question their past exposure and wonder how current and future pilots will be protected as the military continues to upgrade radars on its combat aircraft.

One Air Force study that did look at cockpit radar radiation exposure in the F-15 fighter jet in 2003 noted that no previous inflight tests had ever been performed. That study measured three flights from the back seat of an F-15D fighter jet found normal levels of exposure.

Gen. David Goldfein, Air Force chief of staff, has pledged to look further into the issue, and the Navy has said that depending on what a new, more expansive Air Force study finds, it may reconsider conducting its own review.

“Technology changes. What do we know about the radiation?” Goldfein said. He and the Air Force surgeon general have directed a first-ever Air Force review of its former pilots going back to 1970, to record cancer cases and look further at potential causes.

“This is one (issue) I am not letting go of,” Goldfein said to McClatchy at an Air Force Association breakfast in November.

The final plan for how that Air Force study will be conducted should be announced by year's end, Air Force Surgeon General spokesman Lou Burton said. Current or former Air Force pilots who want to be counted in the Air Force study can email the Red River Valley Fighter Pilots Association.