A U.S. Army soldier in Hawaii swore allegiance to ISIS, kissed their flag, and had a plan to “go to... 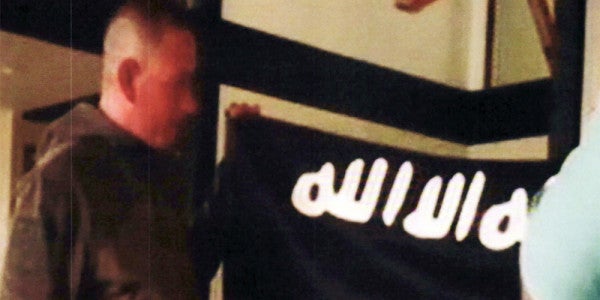 A U.S. Army soldier in Hawaii swore allegiance to ISIS, kissed their flag, and had a plan to “go to downtown Honolulu and Waikiki strip and start shooting,” prosecutors say.

Sorensen said Kang pledged his loyalty in Arabic and English, and kissed an ISIS flag given to him by a FBI agent pretending to be an ISIS official.

In August 2017, Kang pleaded guilty to four counts of attempting to provide material support to a foreign terrorist organization — including handing over U.S. military drone, secret documents, the AP said.

The documents he is accused of leaking include a military weapons file and material which contains personal information about U.S. service members, prosecutor Ken Sorensen said.

He also gave away radio call signs, mission procedures and radio frequencies, Sorensen said. He was arrested on July 8.

Kang was a decorated soldier with deployments to Afghanistan in 2013 and Iraq in 2011, CBS News reported, receiving the Global War on Terrorism Service Medal in the course of his duties.

In this combination of two file images taken from FBI video and provided by the U.S. Attorney's Office in Hawaii on Thursday, July 13, 2017, Army Sgt. 1st Class Ikaika Kang kisses an Islamic State group flag, left, then puts the flag to his forehead, right, after allegedly pledging allegiance to the terror group at a house in HonoluluAssociated Press

The FBI Special Agent in Charge, Paul D. Delacourt, told Fox News in July 2017 that the U.S. Army and FBI had been investigating Kang for more than a year.

Kang's lawyer, Birney Bervar, said before the guilty plea that Kang may suffer from “service-related mental health issues of which the government was aware but neglected to treat,” the Associated Press (AP) reported.

As Kang pleaded guilty, prosecutors said they won't charge him with any other crimes, like violating the espionage act, AP said.

AP also reports he's expected to receive a 25-year sentence as part of the plea agreement.