A 67-year-old veteran from Geneseo, Illinois, pleaded guilty to stolen valor charges on Aug. 22, after misleading the Department of … Continued 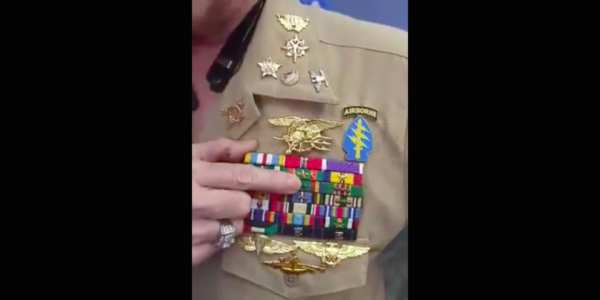 After retiring in 2003, Jones sought disability benefits from the VA, claiming he suffered from post-traumatic stress disorder from the combat he never saw combat in Vietnam. Jones went so far as to falsify information on his DD-214, solicit help from the American Legion in 2013 with a false certificate from a Vietnam Special Operations Group confirming his service, forge a certificate for an Enlisted Aircrew badge, and offer up a 2008 letter from then-candidate Barack Obama which attested he was a Vietnam veteran.

Jones also alleged that he was shot down while serving as crewman on an AC-130 Spectre gunship and rescued Marines after spending three weeks in enemy territory. For his actions there, he claimed he had been awarded a Bronze Star Medal with V for Valor and a Purple Heart. But during his guilty plea, Jones admitted that not only did he not serve with special forces in Vietnam in 1972, but that he never physically served in Vietnam at all.

According to the DoJ statement released after his indictment in June 2016, Jones also “submitted a form containing false information to the office of U.S. Senator Richard J. Durbin to support his claim for veterans disability benefits.” The document stated that Jones was deployed to Vietnam in 1972, where he served with 10th Special Operations.

After receiving Jones’ falsified documents, the VA paid him $71,472 for combat-related disability. Now, he could be tapped to pay the VA back in restitution.