She Joined The Army To Serve Her Adoptive Country. Now She’s Fighting For Citizenship

Yea Ji Sea joined the U.S. Army more than four years ago hoping to serve her new country and, in... 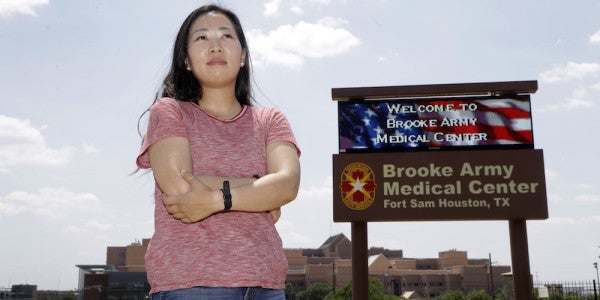 Yea Ji Sea joined the U.S. Army more than four years ago hoping to serve her new country and, in the process, earn her citizenship.

That abruptly ended last week. The 29-year-old Gardena resident from South Korea was forced out of the military with an honorable discharge, but no word on the citizenship application she filed two years ago. Without it, Sea fears she could be arrested and deported — even after receiving glowing reviews for her military stint in her adopted home country.

Though Sea's struggle is unique in some ways, it is also part of a broader conflict involving immigrants hoping to become citizens by serving in the military and the Trump administration, which has taken steps to narrow that path to citizenship.

On Tuesday, backed by the American Civil Liberties Union, Sea appeared in federal court in Los Angeles, hoping to force the government to act on her citizenship application.

U.S. District Judge Michael Fitzgerald denied the ACLU's request for a preliminary injunction without prejudice, and gave the government until Sept. 5 to come back with a decision on Sea's citizenship application.

“Pretty much he gave us what we were asking for. Within 20 days the government has to make a determination on her citizenship application,” said Sameer Ahmed, a staff attorney with the ACLU of Southern California,

The lawsuit appears to have made a difference. Federal officials scheduled an immigration interview, part of the next step in the application process, for Wednesday, Aug. 15.

Still, Ahmed said there were no guarantees Tuesday from the government that immigration officials wouldn't detain her as part of that hearing.

The ACLU attorney linked Sea's case and the recent discharge of other immigrant recruits to President Donald Trump's broader stance on immigration, narrowing the window on who is allowed to live in this country as an American.

“This does seem to be a pattern from the Trump administration of anti-immigrant sentiment because they do not want (immigrant) soldiers to, A, be a part of the military, and B, to receive citizenship that they're owed,” Ahmed said.

Sea's path to citizenship began when she joined the Army through a program called Military Accessions Vital to the National Interest, otherwise known as MAVNI. The program allows noncitizens who are “lawfully present” in the country to enlist and work for their citizenship. The program looks for those who have skills needed by the military. Sea is fluent in Korean and qualifed as a healthcare specialist. Her goal was to become an Army doctor.

“I truly loved my time there,” Sea said Tuesday of her time in the military. Leaving the Army, she said, has left “a big, empty place.”

While the MAVNI program began only in 2009, the U.S. has a long history of immigrants serving in the military, often in battle, as part of a path to legal citizenship. During WWII, more than a third of the 300,000 people who served were noncitizens, according to the Bipartisan Policy Center. During the Korean War, 31,000 soldiers born outside the country became American citizens.

But in recent months, dozens of immigrant military enlistees have been discharged or had their contracts cancelled, the Associated Press reported.

Some said they were given no reason for their discharge. Others said the Army informed them they'd been labeled as security risks because they have relatives abroad or because the Defense Department had not completed background checks. Early last month, the Pentagon said there had been no specific policy change and that background checks were ongoing.

Then, the U.S. Army stopped discharging immigrant recruits, according to a July 20 memo shared with the Associated Press.

The policy shifts have come as the Defense Department has attempted to strengthen security requirements for the program, which the ACLU said is no longer taking new applicants.

The tighter look at immigrants in the armed services is also a shift from the recent past.

More than 5,000 immigrants were recruited into the program in 2016, and an estimated 10,000 are currently serving. In all, nearly 110,000 members of the Armed Forces have gained citizenship by serving in the U.S. military since Sept. 11, 2001, according to the Defense Department.

Sea was 9 when she came with her parents from South Korea to the United States. She grew up in the Koreatown neighborhood of Los Angeles before moving to Gardena.

in 2013, after her mother saw an ad on TV about the military program for immigrants, Sea joined the Army. One stint was in South Korea, where she served as an ambulance aid driver and was the only pharmacy technician for a station that served more than 1,800 soldiers. On her own time, she also served as a translator for doctors and helped care for injured soldiers.

More recently, she was stationed at Fort Sam Houston in San Antonio, where she earned two Army Achievement Medals “for exceptionally meritorious service.” In 2015, she was promoted in 2015 to specialist.

Her former platoon sergeant wrote in a character statement: “She has sacrificed for this country more than what most American citizens are willing to give up for their country. I would trust her with my life and deserves citizenship more than most.”

On Tuesday, Sea said she was surprised the military couldn't shield her from the stepped up immigration crackdown.

“As a soldier, I thought I would be protected.”

Sea was a legal resident of the U.S. when she first arrived via a visitor visa and later through an investment visa. In 2008, she received a student visa to study at the Neo-America Language School in Los Angeles.

And that's where her legal status got messy.

When she applied for citizenship, a government review alleged that her student visa was obtained fraudulently as part of a larger scheme involving the school. What Sea didn't know, her attorneys said, is that the language school was working with a corrupt U.S. Customs & Border Patrol agent to create false forms that would help people obtain student status. In 2013, that agent was one of six indicted for providing immigration benefits in exchange for money and gift bribes, according to the lawsuit. Meanwhile, according to the lawsuit, the owner of the school was sentenced to 15 months in federal prison after pleading guilty in the fraudulent scheme.

Sea was only 19 at the time and “had no knowledge of the fraudulent scheme,” according to her court filings. She also said a student visa acquired with the help of the school had an erroneous date.

A U.S. Citizenship and Immigration Services spokesperson declined to comment on Sea's case, writing in an e-mail Tuesday that the agency “adjudicates all naturalization applications fairly, efficiently, and effectively on a case-by-case basis to determine if they meet all standards required under the law.”

Timothy Biche, assistant U.S. attorney, told the judge Tuesday that the statements she previously made are “100 percent relevant” to her moral character, an issue that's significant in a naturalization application.

Meanwhile, Sea is continuing with her studies and is looking toward medical school next year. Still, her heart is in the Army and she's hopeful that she will be able to return.

Referring to the July 20 government memo putting a stop to the discharge of immigrant detainees, she said: “My hope is that maybe the memo can apply to me. In the meantime, I'm just taking one battle at a time.”