Three military bases in Texas are being considered as sites for tent cities to house unaccompanied immigrant children who enter... 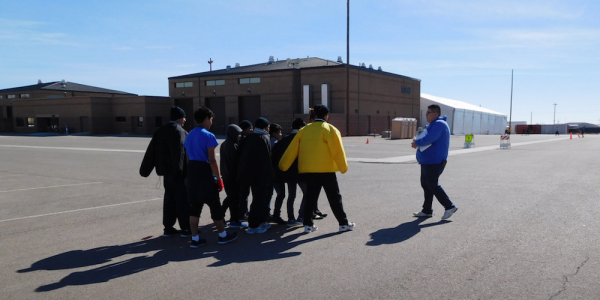 Three military bases in Texas are being considered as sites for tent cities to house unaccompanied immigrant children who enter the United States illegally, according to a report from McClatchy.

The U.S. Department of Health and Human Services has been considering alternative housing options for the thousands of immigrant children being detained without their parents in the United States. In May, the department said it was considering using military bases.

Federal officials will be visiting Fort Bliss in El Paso in the coming weeks to assess whether a tent city can be constructed to house anywhere from 1,000 to 5,000 children, according to McClatchy. Goodfellow Air Force Base in San Angelo and Dyess Air Force Base in Abilene also are being considered.

Federal officials will tour vacant properties near these military installations to determine whether migrant children can be housed at the sites, according to a statement from the Administration for Children and Families at the U.S. Department of Health and Human Services.

“HHS will make the determination if any of the three sites assessed are suitable and selected for unaccompanied alien children program operations,” the statement reads. “HHS will continue to keep local and congressional officials informed during this assessment and selection process.”

The United States has adopted a new “zero tolerance” policy, with Trump administration officials pledging to intensify criminal prosecution of people crossing into the country illegally. This means children crossing the border with their families are separated from their parents if they are apprehended.

Minors who enter the United States illegally or those who are separated from their families after entering the United States are placed in the custody of the U.S. Office of Refugee Resettlement in the Department of Health and Human Services.

The Administration for Children and Families said it has 100 shelters for minors in 14 different states. It frequently considers new properties with existing infrastructure for temporary shelter options.

El Paso area lawmakers on Tuesday sent a letter to Trump administration officials urging them to reconsider the practice of separating families. They also voiced concerns about using military bases as temporary shelters.

“Further, the clear purpose of military bases is for armed services operations and housing of military personnel, not for housing immigrant children forcibly taken from their parents,” the letter reads.

“We recognize that ORR shelters are different than family detention centers in terms of scope, services, and purpose,” the letter reads. “However, we are concerned that a temporary ORR shelter at a military base may resemble a detention center much more than a traditional ORR shelter.”

During a news conference at the federal courthouse in El Paso on Tuesday, the same lawmakers said the practice of separating children from parents is inhumane.

“I can’t imagine the horror I would feel after traveling all those miles, trying to escape persecution, only to have my children ripped away from me when I tried to do this the lawful and legal way seeking asylum,” Moody said at the news conference.

U.S. Rep. Beto O'Rourke, a Democrat who represents El Paso, said this week he is drafting legislation to end the practice of separating families.

After meeting with people in McAllen along the U.S.-Mexico border, O'Rourke discussed the government's new zero tolerance policy in a live Facebook video.

He said there should be consequences for people who cross the border illegally, but there are better options than taking a child away from his or her parents.

“We can keep ourselves secure without compromising our values and who we are,” O'Rourke said in the video.