Immigrants serving in the U.S. military are being denied citizenship at a higher rate than foreign-born civilians, according to new government data that has revealed the impact of stricter Trump administration immigration policies on service members. 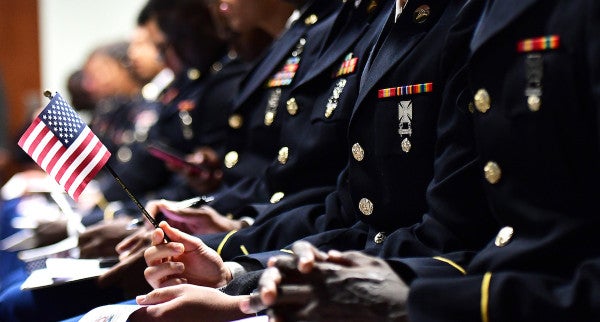 ASHINGTON — Immigrants serving in the U.S. military are being denied citizenship at a higher rate than foreign-born civilians, according to new government data that has revealed the impact of stricter Trump administration immigration policies on service members.

According to the same data, the actual number of service members even applying for U.S. citizenship has also plummeted since President Donald Trump took office, the U.S. Citizenship and Immigration Services reported in its quarterly naturalization statistics.

“The U.S. has had a long-standing tradition of immigrants come to the U.S. and have military service provide a path to citizenship,” said retired U.S. Army Maj. Gen. Paul Eaton, a senior adviser to the liberal veterans advocacy group VoteVets.org. “To have this turnaround, where they are actually taking a back seat to the civilian population, strikes me as a bizarre turn of events.”

According to the most recent USCIS data available, the agency denied 16.6% of military applications for citizenship, compared to an 11.2% civilian denial rate in the first quarter of fiscal year 2019, a period that covers October to December 2018.

The fiscal year 2019 data is the eighth quarterly report of military naturalization rates since Trump took office. In six of the last eight reports, civilians had a higher rate of approval for citizenship than military applicants did, reversing the previous trend.

Attorneys for service members seeking to become citizens said new military immigration policies announced by the administration in 2017 and Trump's overall anti-immigrant rhetoric are to blame.

“I think people are disheartened right now by the immigration climate,” said Elizabeth Ricci, an attorney who is representing immigrant service members. “We talk about a wall all the time. This is an invisible wall.”

Overall, the number of service members who apply to become naturalized citizens is just a fraction of the civilian applications, but both pools have shrunk over the last two years. In the first quarter of the Trump administration, January to March 2017 — which is the second quarter of fiscal year 2017 — there were 3,069 foreign-born members of the military who applied to become naturalized citizens. That same quarter, 286,892 foreign-born civilians applied.

In the first quarter of fiscal year 2019, USCIS reported it received only 648 military applications for citizenship, a 79% drop. For comparison, the agency received 189,410 civilian applications, a 34% drop.

The Defense Department was repeatedly asked for comment by McClatchy, but did not provide a response.

USCIS officials said the drop in applications is not due to any action by their agency, which processes the applications as it receives them.

“The fall in military naturalization applications is likely attributable in significant part to the Department of Defense's decision not to renew the Military Accessions Vital to the National Interest (MAVNI) program after its expiration at the end of FY17,” USCIS said in a statement.

Immigrants who wish to join the U.S. military fall into three categories: legal permanent U.S. residents, commonly known as “green card” holders; foreign-born recruits with key medical or language skills who came to the United States under student, work or asylum visas and enlisted through MAVNI; and special status non-immigrant enlistees, who are residents of the Federated States of Micronesia, Republic of the Marshall Islands, and Palau.

The Trump administration in 2017 announced major changes to the way the Pentagon would vet and clear foreign-born recruits and other overall changes to when a service member would qualify for naturalization.

The impact was felt across all three categories of recruits, said retired Army Reserve Lt. Col. Margaret Stock, an attorney who specializes in representing immigrant soldiers in her private practice.

In the months that followed, the Defense Department shut down naturalization offices at some of its basic training locations, citing the new policy.

Other changes appeared procedural but had deep impact, such as the change that only higher-ranking officers, at colonel or above, were authorized to sign key USCIS forms verifying that an enlistee had served honorably. The signatures had to be original, too, which made it much more difficult for troops in outlier areas where the nearest colonel or higher-ranking officer may be hundreds of miles away, Stock said.

The new rules had a chilling effect, military immigration attorneys said. Unit leaders who previously would have shepherded naturalization paperwork through for their service members have stopped doing so, the attorneys said.

“People are telling them 'wait until you get to your first unit.' When they get to the unit they are told, 'we don't know anything about this anymore,'” Stock said.

The lack of guidance in units for immigrant soldiers “is all intentional,” Ricci said. “It's part of this overall culture of 'No.'”

The new rules have left some recruits waiting for years to serve.

Army recruit Ajay Kumar Jaina, 33, came to the United States from India in 2012 on an H-1B visa to work for Veritas Healthcare Solutions. He has a master's degree in pharmaceutical analysis and wanted to become a military pharmacist. In May 2016 he enlisted under MAVNI for his medical skills.

He's been in a holding pattern ever since. In the almost three years he's waited to go to basic training, he's reported for duty for more than 20 weekends with the 445th Quartermaster Company in Trenton, New Jersey.

He goes to New Jersey knowing that he will be unable to drill with the rest of the unit because he has not yet undergone basic training since the Defense Department has not completed his background check.

So his activities on base are limited to administration and inventory roles.

“When I registered in the Army, at that time I was told my basic training location. I was told within six months my background check would be verified, and then I could go to basic and then (advanced individual training) then I could be come apply for citizenship,” Jaina said.

Jaina said no determination has been made on his background check yet. “Which is actually good!” he said. “I can wait. I can keep my hopes high.”

Jaina's H-1B visa expires next month and he said he may have to go back to India in order to be able to return to the United States under a new visa as he continues to wait.

Eaton questioned why the Defense Department would make it more difficult to pull from eligible immigrant recruits, particularly in light of the recruiting challenges the military faces overall.

“Only 25% of the U.S. population is eligible to serve, due to academic, health or behavioral issues,” Eaton said.

Last year the Army missed its annual recruiting goal by more than 6,500 personnel. In a statement, the Army would not say whether the immigration policies had impacted its ability to recruit last year.

“Our leaders remain confident that we have laid the foundation to improve recruiting for the Army while maintaining an emphasis on quality over quantity,” the Army said.

SEE ALSO: I’m A US-Born Army Vet. Why Did Border Patrol Just Try To Arrest Me And My Wife?

WATCH NEXT: Meet The Men Of Deported Veterans Support House