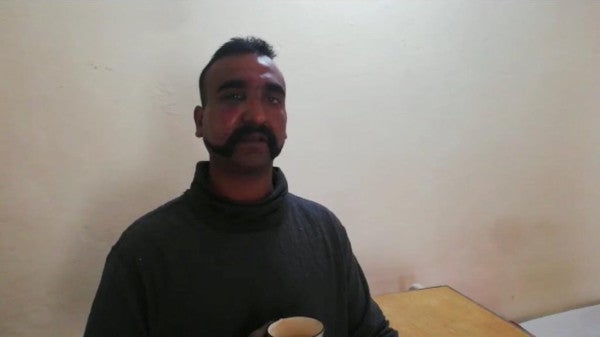 NEW DELHI — An Indian Air Force pilot captured by Pakistan was released on Friday, offering the two countries a chance to de-escalate the worst military tensions in decades.

Wing Commander Abhinandan Varthaman was handed over to Indian authorities after his jet was shot down over the disputed region of Kashmir earlier this week. Indian and Pakistani television channels showed Varthaman being handed over at the Wagah-Attari border crossing in the state of Punjab, which was split in the Partition of British India in 1947.

It marks the end of a dramatic week in South Asia that began when India bombed targets inside Pakistan on Tuesday. Indian officials say they hit a terrorist training camp that belonged to Jaish-e-Mohammed, a group that claimed a deadly suicide bombing in Kashmir, which Islamabad denied. Forty Indian paramilitary troops were killed in the Feb. 14 attack.

The situation escalated dramatically on Wednesday when Pakistan Air Force jets flew toward Indian airspace, prompting New Delhi to scramble fighter jets to engage them. The ensuing clash resulted in both Varthaman's jet and a Pakistani F-16 being shot down, according to India's armed forces. Pakistan denies it used F-16 jets or that one was grounded.

Varthaman's jet crash landed in Pakistan after the unprecedented clash between the warplanes. He was captured by Pakistan's armed forces, shown drinking tea in a video released later that day — which India objected to as a “vulgar display” that violated international law — and has appeared on the front pages of India's newspapers as a hero.

Indian officials refused to negotiate and called for his immediate release. On Thursday, Pakistan Prime Minister Imran Khan, who previously called for talks to defuse the situation, announced he would release the pilot as “a gesture of peace.”

“The fact that Pakistan's government agreed to release the pilot shows there's a desire in Pakistan to deescalate and they've communicated that in unambiguous terms,” said Happymon Jacob, an associate professor at New Delhi-based Jawaharlal Nehru University's School of International Studies. “Having received the pilot back, you can't go back to war.”

SEE ALSO: The Indian fighter pilot shot down over Pakistan reportedly swallowed sensitive documents before he was captured