President Trump signed an executive order Friday, March 27 allowing the military to recall members of the selected reserve and some former service members to active duty in support of the government's response to the novel coronavirus (COVID-19) outbreak 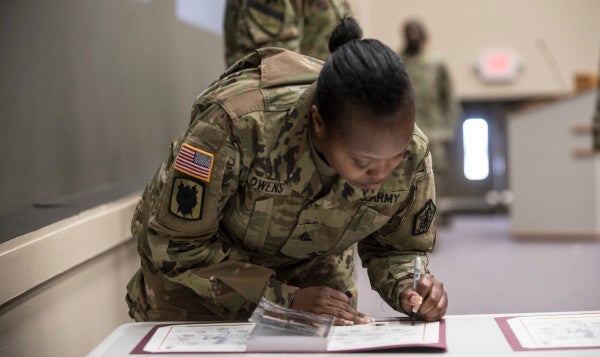 Editor’s note: This article by Jim Absher originally appeared on Military.com, a leading source of news for the military and veteran community

You may have heard that President Trump signed an executive order Friday, March 27 allowing the military to recall members of the selected reserve and some former service members to active duty in support of the government's response to the novel coronavirus (COVID-19) outbreak.

While this sounds ominous, the executive order is mainly a formality giving the Pentagon the authority to recall reserve members as necessary. A federal law (10 U.S. Code § 12302) that has been around since 1953 authorizes the president to recall up to one million reservists for up to two years in times of national emergency.

The military branches have also started to gauge interest from recently separated members on volunteering to return to active duty in response to the COVID-19 pandemic. The Army, for example, recently contacted 800,000 retired members asking about their willingness to return to active duty and help the service fight the pandemic. More than 17,000 retirees, representing various specialties, have responded at the time of this writing.

Who will be the first to be recalled?

If the coronavirus pandemic worsens and requires a major military mobilization, an involuntary recall would begin only if there aren’t enough active-duty members, selected reserve and guard members and volunteers returning to active duty. The order of recall is as follows:

Again, the needs of the service are tantamount, and some military specialties may have different rules than others. A medical officer who has been out of the military for 15 years may be recalled before an aircraft mechanic who separated last month.

What happens if you are recalled?

You will most likely get a certified letter from the military directing you to an intake center. If you don’t answer the letter, they will send another one to your home of record. If you still don’t respond, you will be identified as a deserter and possibly face legal action.

If you are recalled, you have the same responsibilities as any active-duty member: no drug use, adherence to grooming and physical readiness standards, support of the needs of the military and obedience to the chain of command.

Even if you meet those obligations, you won’t be eligible for any promotions as a recalled member. Instead, you will be paid at your current rank or the rank at which you separated. Your retirement pay and any VA disability benefits will also stop for the duration of your revitalized active duty service.