​The U.S. military conducted its first flight test of a conventional ground-launched cruise missile in a test that would have been banned prior to the recent collapse of a Cold War-era nuclear arms agreement 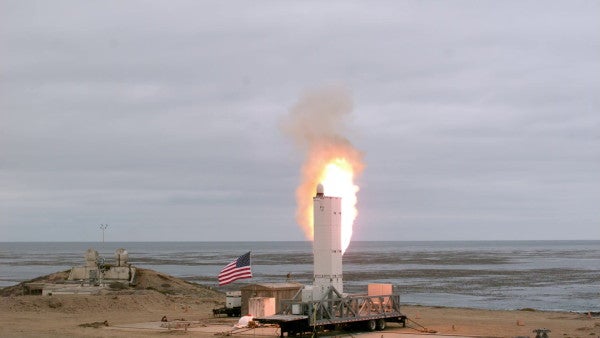 The U.S. military conducted its first flight test of a conventional ground-launched cruise missile in a test that would have been banned prior to the recent collapse of a Cold War-era nuclear arms agreement.

The missile was launched on Sunday from a testing site on San Nicolas Island in California. “The test missile exited its ground mobile launcher and accurately impacted its target after more than 500 kilometers of flight,” the Pentagon explained in an emailed statement, adding that “data collected and lessons learned from this test will inform the Department of Defense's development of future intermediate-range capabilities.”

Earlier this month, the US officially withdrew from the Intermediate-Range Nuclear Forces (INF) Treaty, a 1987 agreement with Moscow that formally limited the development of ground-launched missiles with ranges between 500 and 5,500 kilometers, or about 300 to 3,400 miles. The US accused Russia of violating the agreement through the development of the Novator 9M729, which NATO refers to as SSC-8.

The White House said in February that Russia has, for too long, “violated the [INF Treaty] with impunity, covertly developing and fielding a prohibited missile system that poses a direct threat to our allies and troops abroad.” The president warned that the US intends “move forward with developing our own military response” to alleged violations of the pact by Russia.

Following the end of the treaty, new Secretary of Defense Mark Esper said in a statement that the “Department of Defense will fully pursue the development of these ground-launched conventional missiles,” calling these moves a “prudent response to Russia's actions.”

The defense secretary has also said that the U.S. is looking at developing these systems to counter China in the Pacific. “Eighty percent plus of their inventory is intermediate-range systems,” Esper told reporters recently. It “shouldn't surprise [China] that we would want to have a like capability.”

While the US moves forward with plans to develop new ground-based intermediate-range missiles, it is still unclear where the US ultimately plans to deploy them.